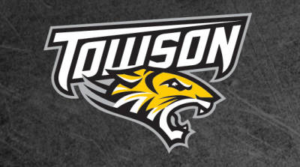 Junior OH Bryn Recker led the Dukes with 12 kills.  For the Tigers, Junior RS Jocelyn Kuilan had 15 kills but it was the numerous errors that help do in Towson (they had 23 hitting errors and six service errors in the match).

For most of the first set, it was closely contested between both teams though James Madison held the lead for all of three points in the beginning (Towson jumped at to a 1-0 lead before two ties at 1-1 and 2-2).  After an attack error by Sophomore MB Silvia Grassini gave the Dukes a 15-11 lead, the Tigers called a time out.

But it did little to stop the Dukes from scoring at will for the remainder of the set.  James Madison won the set 25-17 on a kill by R-Shirt Sophomore OH Kelly Vahos.  It gave the Dukes a one set to none lead.

Towson quickly jumped out to a 3-0 lead to begin the second set but James Madison eventually caught them to take their first lead at 8-7 on the hands of another Vahos kill.  Towson went on a 6-4 mini-run to cause James Madison to call a time out with the Tigers leading 13-11.

The Tigers still managed to hold on to the lead when James Madison called it’s final time out of the set with Towson leading 19-16.

When play resumed, James Madison went on a 5-1 run to wrestle the lead back at 21-20.  With the Dukes leading 23-21, Towson was forced to call a time out to regroup.

Towson came out of the time out to score the next three points and had their first set point at 24-23 but an attack error by Kuilan tied the score at 24-24.  Another Tiger attack error by Junior OH Carol Biver gave the Dukes their first set point at 25-24.  On the next point, Kuilan’s kill tied the score at 25 but it was not enough as James Madison got back to back kills from Freshman OH Liv Crawley and Recker and they took the second set, 27-25 and held a commanding two sets to none lead.

For the first half of the third set, the Tigers would hold between a one and three-point lead, with their biggest lead being at 10-7.  The Dukes used a 7-4 run to force a Tigers time out with James Madison leading 17-14.  Towson would close the gap down to two at 21-19 on a Grassini kill but the Dukes used a 3-1 run to not only have their first set/match point but caused Towson to call their last time out at 24-20.

James Madison would have to wait one point as a kill by Tigers Junior MB Olamide Sonuga cut the lead to 24-21.  But on the very next point, Dukes Junior MB Taylor Gail killed the ball into Towson’s side of the net and James Madison took the third set, 25-21 and the match, three sets to none.

James Madison advances to the CAA Championship game and will play top-seed College of Charleston.  Winner of that game gets the automatic bid into the NCAA Tournament.  More than likely, the loser’s season will likely be over.