Bellator 220 goes down Saturday night April 27 at the SAP Center in San Jose, California. Headlined by not one but two huge title fights.
Welterweight champion Rory MacDonald will defend his title in the first round of the Bellator Welterweight Grand Prix against former UFC veteran Jon Fitch. Two experienced fighters with impressive records and resumes clash for the gold in this exciting main event. 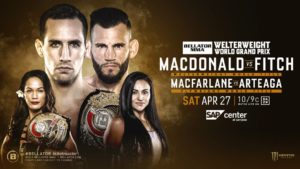 After making a huge splash in Bellator with wins over Paul Daley and Douglas Lima Rory had not only taken Bellator by storm but also taken the Welterweight title. Trying to land the champ champ title Rory took a shot at the Middleweight title but feel short against Gegard Mousasi. Bouncing back in a tournament style system with his title on the line “The Red King” looks to solidify his place at the top of the division once again.
Fitch enters the tournament with a shot t win the title in the first round so his motivation is on full tilt. The former UFC veteran will look to steal the thunder and the crown from the red king Saturday night. The winner will advance as champion against Neiman Gracie.

Reigning champion Ilima-Lei rolls in at 9-0 with 7 finishes and over half of her total wins coming via submission. This Hawaiian Goddess has won the hearts of the fans in Bellator and looks to showcase her submission skill set against Veta.
Arteaga comes in winner of her last two fights. One win via decision and one by way of submission. The talented American striker has a ton of confidence and is hungry to upset the champ and prove she belongs on top of the mountain at Bellator. Arteaga’s submission defense will no doubt be tested in this match up and Saturday night we find out just how good she really is.

Henderson is clearly the more experienced fighter in this one. Not only in the number of fights but also the level of competition he has faced. The former UFC champion is looking to make one more run as Bellator champion when he enters the cage with a rising star in Piccolotti.
Piccolotti comes in on a two fight win streak and is hungry for the chance to drop a former UFC champion. With almost half of his wins coming by way of submission I think we all believe that is how Adam will look to attack Benson. Henderson’s experience will prove difficult for a submission win but Piccolotti feels confident he can tap the former champ.

Mr wonderful makes his return to the Bellator cage against another veteran in the way of Liam McGeary. Both men are exciting strikers and can catch their opponent from angles. They both love a highlight reel finish and will look for KO of the night in this battle. A rematch from two and a half years ago where Davis defeated McGeary in a 5 round decision to win the title. This one screams revenge for McGeary while Davis knows a second win shows his dominance against the former champ. 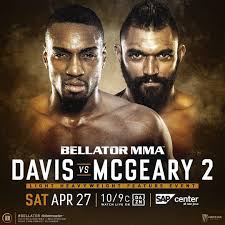 Checkout a previous Bellator MMA article of mine on MVP 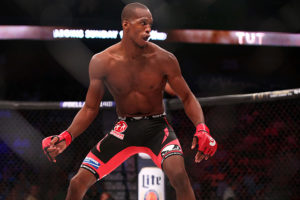