What to Make of This Terps team? 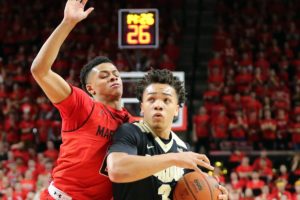 Expectations for this Maryland team coming into the season were tempered. They had lost Melo Trimble and no one knew quite what to make of the team in its current state. Fans knew we had something in the sophomore core of Huerter-Cowan-Jackson, and by and large they’ve performed admirably, if not inconsistently.

As Huerter has gone this season, so have the Terps. His worst game of the season was a meek 5 points in a loss to Saint Bonaventure. Unfortunately for the team however, arguably his best career performance was wasted in the loss at Syracuse wherein he made 7 threes, most of which were from absurd distance.

Cowan has been a rock for Maryland, and has scored double digits in every game he’s played. He’s also been far more consistent from deep, raising his 3-point percentage by 54 points. His youth and relative inexperience have shown however, since becoming the starting pg this season, he’s committed 3.0 turnovers per game as opposed to his 2.3 clip last year.

Jackson has been ok this season, but has largely disappointed. His scoring has decreased from 10.5 to 9.8 ppg despite attempting 1.1 more shots per game. The most striking decline however, must be his 3-point efficacy, which has drastically decreased from .438 to .250. Jackson’s marked decrease in productivity is bad news for Jackson more than anyone, as it will undoubtedly drop his draft projections whereas he was expected to go in the first round next june.

Aside from a team standpoint, the Terps have done very little to gain a favorable seed in the NCAA tournament. They’ve had opportunities to pick up quality wins, but squandered 2 out of their 3. they got the impressive win against Butler, but lost a nail-biter against Purdue and another one at Syracuse, both on national TV. None of the other wins will have much of any weight come march given that they’ve come against low quality opponents that Maryland should beat anyway. Luckily, the Terps have also had only one bad loss in Saint Bonaventure, and even they are regarded as a good team in their own conference.

So what do we think of this team going forward? It’s clearly a young team going through growing pains. One of the optimal lineup of starters are even older than a sophomore in Ceko. They’ve shown they can hang with anyone in their loss to a seasoned Purdue team, and that will only continue to strengthen. The x-factors going forward will be Morsell and Fernando. They have shown flashes of brilliance thus far, and if they can continue to trend upward, this team can be very good with two big man and a reliable guard off the bench.

I predicted in my season preview that Maryland would go 21-9 with an 11-7 conference season. Should the Terps hit that overall record, they’ll need to go 12-6 in conference play, which is certainly doable given that would be the fourth straight year with a 12-6 conference record. Assuming no more bad losses coupled with a few strong road wins, Maryland should be in line for a 6-8 seed.