The last regular season match at the Retriever Soccer Park ended on a somewhat surprising and somber note as the UMBC Retrievers fell 2-0 to the Stony Brook Seawolves on senior night at Retrievers Soccer Park.

UMBC vs. Stony Brook, November 1, 2017. All rights and credits to Ian Feldmann.

The Retrievers failed to score a goal at home for just the second time in the season, the last time coming against Western Michigan, the 8th ranked team in the nation. This was quite surprising as the Seawolves had the third worst goal differential in the league(-1) conference at the start of the game.

The Retrievers started the game off confused and slow. Senior star Cormac Noel didn’t start for the third straight game as he continues to deal with an injury. It was instead James Gielen and David Harris that got the start up front.

Coach Peter Caringi made the change and put Noel in for Harris immediately after the first goal which enabled them to finally start controlling the game.

Forward/Midfielder/Defender Cormac Noel wind up shot vs. Stony Brook. All rights and credits to Ian Feldmann.

Midfieler Jon Bell winds up cross vs. Stony Brook. All rights and credits to Ian Feldmann.

Forward Tre McCalla on the counter-attack for the UMBC Retrievers. All rights and credits to Ian Feldmann.

The Retrievers finally began creating chances but unfortunately were never able to capitalize. The Retrievers had 16 shots with just 4 on goal, compared to the Seawolves 10 with 7 on goal. The Retrievers also led in corners 13-4. Both these stats point to fact that UMBC had the majority of possession and control of the game.

The two goals scored by Seawolves were both off mistakes from freshman keeper Ciaran O’Loughlin. The Seawolves scored in the 16th minute from a set piece header which snuck its way into the bottom left corner and once again in the 84th minute as O’Loughlin came out far beyond his box to midfield where he lost possession and failed to get back on time to make a stop(something he’s done 3 times this season).

It’s not as if the Retrievers had an atrocious performance, the team played well as a complete unit. The defense won balls and had plenty of stops, helping create momentum and chances for the offense. The matter of fact is that we outpaced the Seawolves on both sides of the ball.

What lost them the game were the countless mistakes on defense, causing anxious play from the offense, by conceding a goal so early in the game. You could tell that they weren’t as comfortable as you’d expect a team playing at home to be.

The Retrievers did clinch the playoffs as the 5th seed and will travel to Albany, New York to face the Albany Great Danes in the quarterfinals of the AEC tournament. The two teams will face off for the second time this season, UMBC winning the last one 3-1 at home.

The @umbcmenssoccer team has CLINCHED a berth into the #AEMSOC Championships!

The Retrievers are coming off three straight losses in which they’ve been outscored 6-1, going scoreless in two straight games.

It’ll be interesting to see if the Retrievers can end the drought against the 2nd best defense in the conference.

Albany is the current 3rd seed with 13 points, 7 more than Stony Brook. Albany also has the highest goal differential in the conference(+18).

The team’s success will come down to how well the defense plays against this Great Danes attack. Great Danes forwards Nico Solabarrieta and Afonso Pinheiro have half of the team’s goals, combining for 14 goals and 10 assists on the season.

If the defense can somehow stop or slow down this duo, the offense will have more time to settle in and play comfortably. 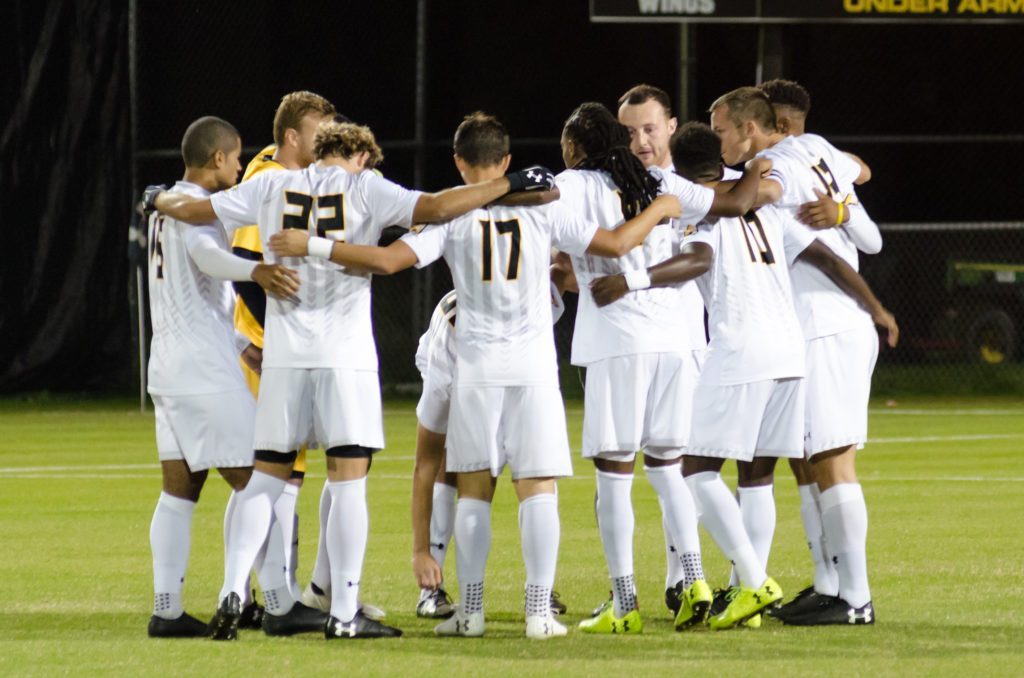 Retriever squad in team huddle as they look to regroup Saturday afternoon vs. Albany. All right and credits to Ian Feldmann.

I'm a current freshman at the University of Maryland Baltimore County, majoring in Media and Communications and Finance. I'm a huge Ravens, Wizards, Arsenal, Retrievers, Blue Devils and Lebron Fan. I've been writing for MD Sports Blog since October of 2017.