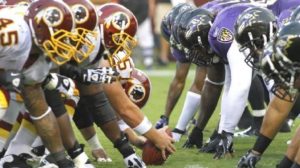 As we dive into the final week of the preseason  the Washington Redskins will take on the Baltimore Ravens and rookies are looking to make their case for a spot on the active roster for the 2018-2019 season. As eyes will be on all rookies here’s our top five players to be looking for.

Kevin Hogan has had a questionable preseason and as we enter week four he’ll be looking to prove he has what it takes to stay on the active roster. Last week against the Denver Broncos he completed 77% of his passes with two touchdowns, if he can come out and do this again and add more he might have a chance to stick on that roster.

Brian Quick was signed last off season but didn’t have high expectations. It wasn’t until the second half of the season that the Washington Redskins started using him in the games unfortunately he suffered a concussion that ended his season. Tonight is his first preseason game and he’s back healthy ready to show he’s still got the skills and quickness for the game.

Cam sims is also returning from an injury proved himself in the first two games of the preseason so he’ll be looking to add on to those preseason stats in preparation for the Regular season as consistency is what the coaches are looking for.

In last weeks match up against the Denver Broncos J.P. Holtz was used as a full back constantly and coaches were impressed with his physical blocking ability. This week eyes will be on him for the consistency and to see how he plays the tight end position along with it.

Jerod Fernandez has been putting up great numbers since he attended Lake Mary High School where he was also named defensive player of the year. He would soon go on to North Carolina State where he recorded 311 career tackles, five interceptions, two sacks, and two forced fumbles. Signed as a college free agent in May 2018 he’ll be looking to continue proving himself to be a fit for the Washington Redskins.