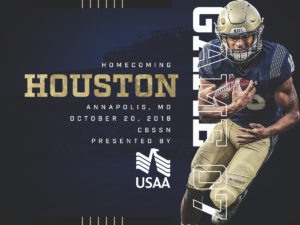 The Navy Midshipmen welcome the AAC West-leading Houston Cougars to Navy-Marine Corps Memorial Stadium on Saturday. The game will be a match between the American’s #1 rushing defense (Houston) and the conference’s #1 rushing offense (Navy).

Unfortunately, Navy has not found the same success in 2018. Having lost three in a row, Navy will be looking to find a foothold on a season that is quickly sliding away from them.

Here’s a look at how Houston and Navy matchup in both team and individual stats this year. (Hint: The two teams could hardly be much different.)

D’Eriq King (junior, QB): Just named to the Manning Award Watch List, King leads the nation averaging 28.3 points responsible per game. He is also 6th nationally with 20 passing TDs and 14th in the nation with an average of 229.3 yards per game.

Ed Oliver (junior, DT): The 2017 AAC Defensive Player of the Year declared for the 2019 NFL Draft in the spring. Playing tackle in a three-man front, Oliver recorded 39.5 tackles for loss his first two seasons. The junior leads all players in the NCAA with a career average of 1.63 tackles for loss per game.

Marquez Stevenson (sophomore, WR): Stevenson has five plays of 50-plus yards this season (2nd in the nation) and eight plays of at least 20 yards. He and Keith Corbin are tied for 14th in the nation with 6 TD receptions in 2018.

1.) The Steady “O” Returns: A positive takeaway from last week’s loss was the improved consistency Ken Niumatalolo’s offense saw with Garret Lewis under center for the majority of the snaps. With Malcolm Perry slipping seamlessly back into the slotback position, the Navy offense ran efficiently, if not always successfully. A second week of stability could do wonders for the Midshipmen’s game.

2.) Penalties Disappear: Penalties continue to plague Navy this year. Admittedly, the Midshipmen have set the bar high (or low, depending on how you look at it) in this category over the past years, but still the change is disturbing. It needs to stop. Now.

3.) Fortune Smiles on the Mids: Houston is a very good team. The calls need to fall Navy’s way to keep us close enough to strike back.