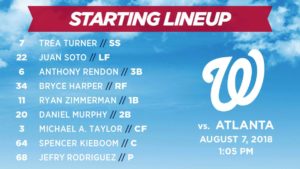 Here’s the Washington Nationals Lineup for Game One of the 8/7/2018 doubleheader versus the Atlanta Braves.

After taking three of four from the Reds, the Nationals are feeling good heading into a crucial four-game series against the Braves.

Jefry Rodriguez, up from Triple-A Syracuse, will be making the spot start in Game One. Rodriguez is 0-1, allowing 15 runs and 10 walks in his three starts with the big league club this season.

With Max Scherzer taking the mound tonight, the Nats would love to be in position for a twin-bill sweep heading into Game Two.