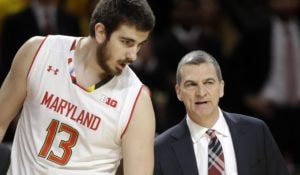 Whether it was the long layoff, overstuffing on stuffing, or the strange venue, the Terrapins simply did not show up to play tonight against Saint Bonaventure. Maryland lost by a score of 63-61 in a game that they were lucky to be in at all, let alone be leading for most of it.

A few staples of the Mark Turgeon era at Maryland have been defense, playing to the level of competition, and turnovers. All three were on display Friday night in Dunedin, Florida. The bright spot was obviously the defense. the Terps held the Bonnies to 38% from the floor including 0 3’s largely because Marvin Mobly seemed to be the only Bonnie able to create offense. Unfortunately, the was a classic trap game, as Maryland came into the tournament as the easy favorite. They probably figured they’d waltz through and continue on their season undefeated. When push came to shove and the Bonnies actually put up a fight, Turgeon’s team refused to adjust and it cost them the game.

The most glaring flaw in Marylands’ game however was the turnovers. They committed a whopping 20(!!!) of them, mostly on ill-advised, bad, or downright lazy passes. They gave the appearance that the players did not want to be there and were simply disinterested in the game. It was fitting that the game ended on a turnover.

Most of the players played below their normal performance level but the worst had to be Kevin Huerter. He looked awful out of the gate, turning the ball over so many times to start the game that he got immediately benched. He also shot horribly from the field converting just one of his 7 3-pointers, good for 14% in a phase of the game that should be his strength. Justin Jackson underperformed yet again in what is becoming an alarming trend. A projected first round pick for the NBA should contribute more than he has, especially against the lesser opponents that the out of conference schedule brings.

Maryland will be fine defensively, but it must cut down on the gigantic turnover numbers and get more consistent contributions from both Jackson and Huerter if it wants to go anywhere this season. The Terps will try to rebound on Saturday the 25th against New Mexico in a game it absolutely must win to get back on track before a couple tough matchups coming this week against Purdue and at Syracuse. Tip is at 4pm on CBS Sports Network.