G1 Supercard featuring stars from New Japan Pro Wrestling and Ring of Honor bring some fantastic action WrestleMania weekend.. Tonight (Saturday, April 6,) Madison Square Garden in New York City will be the amazing venue for this historic event. It all kicks off at 7:30 pm et / 4:30 pm pt. NJPW and ROH have stacked the card with talent and about 11 action packed matches set so far. WrestleMania weekend is always a smorgasbord of wrestling events but this is one you don;t wanna miss. 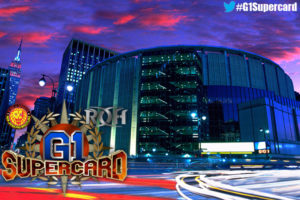 Honor Rumble (Pre-Show)
A chance to showcase several additional talents that would not have made the card due to limited spots available between the two top promotions. A chance to see some new talent that you might not have seen yet.

Will Ospreay vs. Jeff Cobb (Never Openweight Champ vs. ROH World TV Champ)
An aerial assassin against a powerhouse big man. Sometimes this works sometimes it does not. In this case it should work wonders as both men can flat out go. Champion vs Champion is always a fun match up and the style differences should make this one an impressive match. 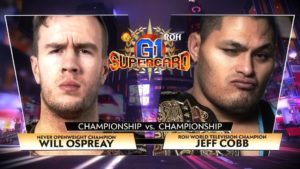 Dalton Castle vs. Rush
I absolutely love Dalton Castle he is one of the most entertaining workers out there. Works the ring, his opponent and the crowd as well as anyone. Solid match up against Rush and should be a ton of fun. 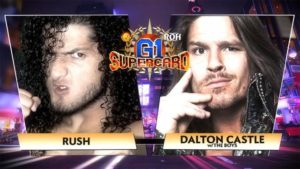 Mayu Iwatani vs. Kelly Klein (WOH World Championship)
Mayu is a fantastic worker and a deserving Champion. I have enjoyed her reign as Champ, with that said I am a big Kelly Klein fan. Klein has the in ring skill, mic work and psychology and ring IQ to become a strong Champion. She also possesses that look a strong physical presence and a beautiful face. 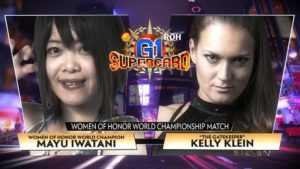 Bully Ray vs. Juice Robinson (NYC Street Fight Open Challenge)
You can’t go wrong with Bully Ray at Madison Square Garden no matter who he has for an opponent. Juice makes this one an epic old school vs new school fight. This event and this venue expect this one to be one helluva match. 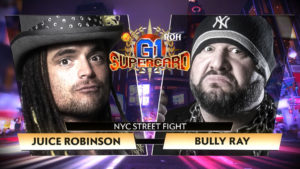 Taiji Ishimori (c) vs. Dragon Lee vs. Bandido (IWGP Jr. Heavyweight Championship)
Nice triple threat with 3 talented workers. Great thing about this one is that I could see any of these three taking the title so it should have plenty of false finishes and a fantastic ending.

Evil & Sanada vs. G.O.D. (c) vs. Villain Enterprises (c) vs. The Briscoes (IWGP & ROH Tag Championship)
Awesome blend of talent and a wide variety of styles and move sets. Four talented teams and some of the best fan friendly entertainers as heels and faces who always get the crowd popping. Killer 4 way battle here and straight up war in the ring. 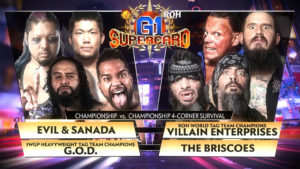 Zack Sabre Jr. (c) vs. Hiroshi Tanahashi (British Heavyweight Championship)
What a damn match up!! Sabre vs Tanahashi could no doubt steal the whole damn show. Ultra talented workers and two guy’s who know each other well this one is set to be an absolute masterpiece.

Tetsuya Naito vs. Kota Ibushi (IWGP Intercontinental Championship)
Legend vs legend, Japaneses icon vs Japaneses icon Naito vs Inushi is hoing to be a 5 star affair mark my words on that one. Two men who will battle until there is nothing left. Two men who have perfected their craft to an elite level. Fans will loose their minds in this one and I expect an unforgettable finish.

Jay Lethal (c) vs. Matt Taven vs. Marty Scurll (ROH World Championship Ladder Match)
These three crazy bastards in a ladder match? What else do you need to hear? This one is going to be electrifying and a thrill ride wrestling match. All three men could hold this title and all three men will sacrifice everything to obtain it. This one is going to be one you will not soon forget and another potential match of the night! 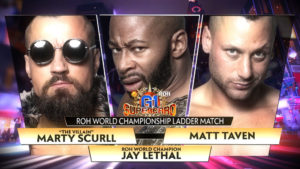 Jay White (c) vs. Kazuchika Okada (IWGP Heavyweight Championship)
Holy Shit I have been waiting for this one. White vs Okada is guaranteed money! Two highly skilled in ring workers and two men who work the crowd as well as anyone sets up a main event that will blow the roof off the garden. These two will give it all to be fight of the night and they will stand tall to any challenge so expect something special as they close out the night. 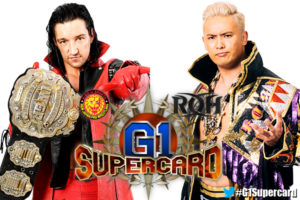 ROH and NJPW put together an incredible event and what a way to spend a Saturday night on WrestleMania weekend. Enjoy all the action Saturday and Sunday and soak it all in this is what we wait all damn year for. 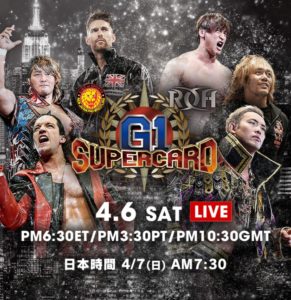 Check out another wrestling article of mine 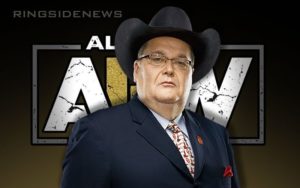