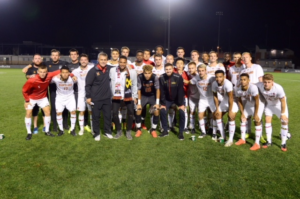 Friday night the number three ranked Maryland Terrapins defeated the Wisconsin Badgers by a final of 5-4. Junior Eryk Williamson supplied the Terps with a second half hat trick

Wisconsin opened the scoring early with a goal by Mark Segbers in the eighth minute. Maryland than pulled even thanks to Amar Sejdic’s first goal of his two on the night in the thirty-sixth minute. Sixteen minutes later Sejdic put the ball in the roof of the net for the second time on assists from Johannes Bergmann and DJ Reeves.

The Badgers tied the match in the sixty-third minute on a goal from Tom Barlow. The game did not stay tied for long as after the Barlow goal Williamson took over for the Terps. Williamson scored two goals in a span of a minute and ten seconds. The first came off of a Jake Rozhansky assist in the sixty-eighth minute and less than two minutes later Williamson sent an insane twenty-five yard chip from the right side that sailed over Wisconsin goalie Phillip Schilling and settled in the back post. The Sophomore finished his hat trick in the eighty-fourth minute, beating the goalie unassisted after being set up by Sejdic.

The Badgers scored two goals within two minutes to make it a one score game but the Terps held them off to secure a 5-4 victory. This extended Maryland’s lossless streak to thirty consecutive games in the regular season going all the way back to 2015.

This win also marked Maryland head coach Sasho Cirovski’s four-hundredth career win. He has a career record of 400-145-47 and a 373-133-47 record with the Terps. Cirovski is the ninth Division One coach and thirty-ninth coach all time to reach the four-hundred win milestone. Cirovski is the second of two active coaches to reach four-hundred wins. This record just adds to the list of achievements of Cirovski’s including two National Championships, twenty-two NCAA Tournament appearances, eight College Cup appearances, and fifteen conference titles.

The Terps return to action Tuesday night in a battle of two top ten teams as number three ranked Maryland (10-0-3) will head to Ludwig Field to battle the number nine ranked Georgetown Hoyas (9-2-1). The match is scheduled for a seven pm start and can be seen live on the Big Ten Network.