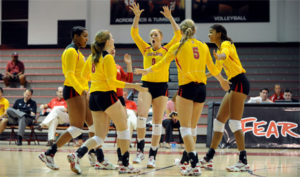 Off to their best start in more than a decade, the Lady Terps enter their fourth season in the B1G Ten.  Conference play begins on Wednesday, September 20 at Ohio State.  Heading into conference play, they are 11-1 overall.

But, after this weekend, this is a lot of buzz about this year’s women’s volleyball team.

It’s what happened on Friday that has this year’s team on the national radar.  Each of the past few years, Maryland, Washington, Oklahoma and Southern California have played in a classic at one of the four’s home court.  This year was Maryland’s turn to host and it ended the first night with a stunner.

The outstanding play of the Lady Terps, came from one junior, two sophomores and a freshman!

Lead by head coach Steve Aird, who previous was a Championship-winning assistant at Penn State, he has this team ready to make the NCAA Tournament for the first time since 2005, when Maryland made it to the 2nd Round before losing to Louisville, 3-0.

Let’s hope the momentum this year’s team has had doesn’t stop until we can another sport onto the long list of fellow sports that have won at least one National Championship!