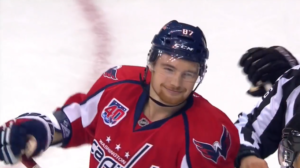 Liam O’Brien scored the only goal for the Hershey Bears during Sunday’s game in Providence. Providence would come out on topSunday 4-1 splitting the weekend in points.

Just 1:43 into the first period, Jakob Forsbacka Karlsson, would score Providence’s first of four, while Pheonix Copley got stuck behind his own net on a misstep. Liam O’Brien would answer back on the power play at 11:17. Just one of those times when being in the right place at the right time pays off. Riley Barber and Chris Bourque also add another assist to their 2017-18 season stats.

The second period would bring two more goals. The first scored by Colby Cave at 8:52 followed by a power play goal scored by Austin Czarnik at 19:52, after Hubert Labrie is sent to the box on a tripping call.

In the third period it would Colton Hargrove at 14:51 who would seal the game putting Providence up 4-1. Copley stopped 16 of 20 shots. While the Bears were outshot 20-18.

Wednesday night 11/22/17 sees Hershey back at the Giant Center to go against The Springfield Thunderbirds. The game starts at 7pm. The Bears will hold their annual Turkey Shoot after the game! Then it’s on the road to Hartford to take on the Wolfpack Saturday night 11/25/17.