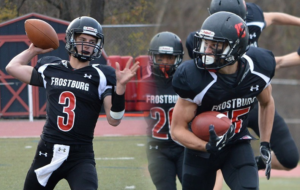 Senior QB Connor Cox completed 12 of 20 passes for a total of 206 yards and threw all three of his touchdowns in the first half for the Bobcats.  His first was to Junior WR Malik Morris for 2o yards (Morris later scored on a 30-yard punt return for a touchdown in the third quarter).  Then he connected from 10 yards out to Sophomore WR Christian Thornton.  His final touchdown throw of the first half, with only four seconds left on the clock, was a 13-yard strike to Sophomore WR Lincoln Ikwubuo.

The Bobcats’ defense was extremely stingy for nearly the entire game, only allowing the Lions a total of 179 offensive yards.  TCNJ would finally get on the scoreboard with five minutes left in the game when Sophomore RB Aydon Chavis scored on a 13-yard touchdown run.

After their most successful season in school history in 2017 (they made it to the quarterfinals of the NCAA Division III Football Playoffs), the 2018 Bobcats return eight starters from that team and they seem to have picked up where last year’s team left off.

Besides having the best ranking in school’s history, in the first two games of this season, Frostburg State has outscored their opponents 81-14 and have an 835-447 advantage in total offense.  The Bobcats special teams have returned two punts for touchdowns and the defense has one interception returned also for yet another touchdown.

Cox has been extremely efficient going 20 for 35 passing with a total of 460 yards, three touchdowns and has not thrown an interception this season.

The Bobcats have rushed for a total of 386 yards and five touchdowns and the leader receiver is Morris, with seven receptions for 233 yards and one touchdown.

Next up for Frostburg State is their home opener of the 2018 season against conference rival Christopher Newport (2-0 overall; 1-0 NJAC) in an early battle for the top spot in the conference.  Kick-off is scheduled for 7 PM at Bobcat Stadium.