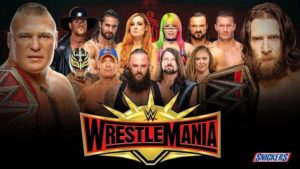 Confirmed: Seth Rollins vs Brock Lesnar
Universal Title
Seth Rollins looks to slay the beast at mania. Brock Lesnar and his advocate Paul Heyman (in my mind the greatest manager of all time) are rolling into night with all the confidence of a conqueror. Rollins has taken a beating from the Scottish psychopath Drew McIntyre as of late and looks to be in a no win situation. Luckily for Rollins that is usually when a miracle tends to happen. Lesnar is rumored to be returning to the UFC and Dana White said he expects that to happen this summer. With that in mind Brock dropping the title is clearly plausible and Seth is the perfect fit to take it. The brutal attacks by Drew on “The Shield” could be a prelim to setting up a feud with Rollins for the Universal title.

Confirmed: Ronda Rousey vs Becky Lynch vs Charlotte Flair
RAW Women’s Title
Ronda Rousey vs Charlotte Flair vs Becky Lynch for the RAW Women’s title. Look I like a good three way as much as the next guy and this one has all the build and the hype to carry it to greatness. While I do believe Ronda vs Becky one on one would be a stellar match up I can see the advantages to bringing Flair on board. Rousey can lose the title without losing to Becky setting up an epic clash between the two baddest women in the WWE. Good business to be made there and I can see that unfolding at Wrestlemania easily enough. With that said Ronda could retain without pinning Lynch and the demand for a one on one by The Man would be well received. This one has a couple outcomes that are perfectly setup so we shall see what way they choose to take it. 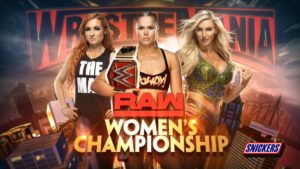 Rumored: Kofi Kingston vs Daniel Bryan
WWE Championship
Kofi has been battered, bruised and flat out screwed by Vince McMahon in his quest for a title opportunity. Things likely will remain the same tonight on Smackdown as Kingston must run the gauntlet to get what he in fact already earned. Kofi has a monumental task at hand as he must face Cesaro, Sheamus, Rowan, Samoa Joe and “The Viper” Randy Orton to secure his spot at Wrestlemnia for the WWE championship. This has been a long time coming and is well past due for Kingston. Vince taking it away and screwing Kofi again and again has the WWE universe firmly behind leader of the “New Day” and that is exactly where Vince wanted them. We find out tonight if Kofi can earn his way in once again.

Rumored: Finn Balor (as The Demon) vs Bobby Lashley
Intercontinental Championship
This makes perfect sense the build up is already there. Finn took the title from Lio Rush and lost it back to Lashley. The David vs Goliath matchup would sever as a battleground for the Demon as he tries to defy the odds and take the IC title. Seems like an easy call makes sense and the fans are screaming for “The Demon” so what’s the hold up right? The hold up my friends is The Undertaker. Taker has asked for the match with Balor as “The Demon” at Mania as something “The Deadman” has been wanting to do. WWE is kicking it around and seeing what could be put together on short notice. While this dream match is screaming to be made it might be next year before we see the epic clash between the two dark side dwellers. 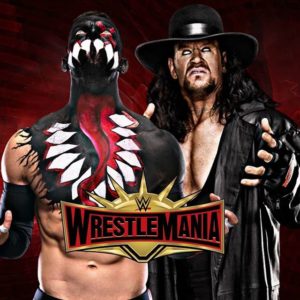 Just a couple of matches and rumors to get you excited about Wrestlemania. We are under 3 weeks away so every RAW and Smackdown count as the road to Wrestlemania continues to unfold. 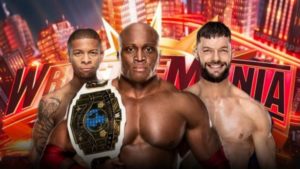 Check out another of my WWE articles here