Becky Lynch started off in NXT as a bubbly little lass who came out doing an Irish jig and playing to fans happy hearts. Lynch had made it to the desired destination of indie stars everywhere. Becky was thrilled to be there and ready to showcase her talents and improve her skill set with the top young stars in the business. Little Irish lass kicker was a big hit with the fans and she loved to perform under the bright lights. Deep down Becky knew there was so much more she just had to find a way to open that door.

Rebecca Quin better known to wrestling fans as Becky Lynch started training in the summer of 2002. Quickly rising up the ranks in Ireland as Rebecca Knox. Travel was immanent as all workers feel the need to be seen and try to travel different cities, states and countries to gain exposure. Becky was no different moving on to wrestle in the rest of Europe and North America gaining momentum and building her own brand. Suffering a severe head injury during a match in Germany in the fall of 2006 the hype train came to a screeching halt as did her career. Almost 6 years on the shelf recovering doing rehab and training to get back to her passion. Wrestling three times during her hiatus once in 2008 then again 4 years later in 2012 and again in 2013. Becky had to decide if her dreams of being a professional wrestler were worth the risks that came with it. I think you all know her answer. 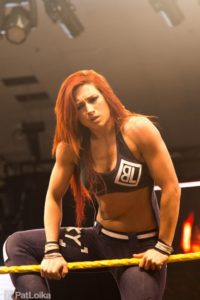 Becky finally embraced her passion signing with WWE in 2013 and committing to chasing her dream of being the best. Lynch made her victorious NXT debut in 2014 against Summer Rae before beginning a great feud with Charlotte Flair. Eyes were opened everywhere in 2015 when Lynch debuted a new look at “NXT TakeOver: Unstoppable” and put on an absolutely masterful match with Sasha Banks. Debuting in 2015 on the main stage for RAW in a tag match with Paige they fell short against Sasha and Naomi but the legacy had begun. Lynch scored her first solo win against Brie Bella leading to a three-team elimination match at “SummerSlam” where once again Lynch pinned Brie for the victory. 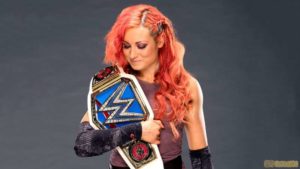 Becky was the first Woman drafted by SmackDown in the 2016 super star shakeup and earned a debut win over Natalya. Becky’s biggest win came at Backlash, Lynch won a six-pack elimination challenge to become the inaugural SmackDown Women’s Champion. Lynch held the title for about 3 months before losing it to Alexa Bliss. Becky is a two time SmackDown Women’s champion and was voted female super star of the year in 2018. Winning match of the year that same year against Charlotte and having maybe the second best match of the year in a triple threat against Flair and Asuka Lynch was the brightest star in the sky. 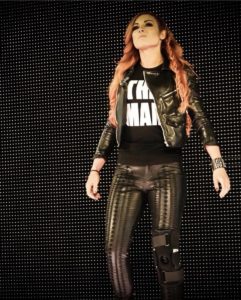 Turn the page to 2019 and we have the emergence of “The Man”. Lynch has embraced this character and ran with it in grand fashion. Hard hitting attacks and brutal antics have catapulted her to the top of the food chain. Fans have turned their backs on fan favorite Ronda Rousey in support of Lynch and her new attitude. Wrestlemania is looming and Becky is desperately trying to force her way back into the Women’s title match. Vince McMahon, always one to throw that swerve has ripped her opportunity away granting Flair the match with Rousey on the biggest stage of them all. Worry not fans the little Irish lass kicker turned “The Man” will fight her way into history and Wrestlemania. Lynch is destined to be in this match and will stop at nothing to beat her way into her opponents heads and into the madness at Mania.. Time is winding down with limited chances on RAW and Fastlane rapidly approaching Lunch must move fast to secure her spot. Being suspended and recently arrested things look bleak for Lynch but make no mistake things happen at a furious pace when “The Man” comes around. Stay tuned wrestling fans business is about to pick up. 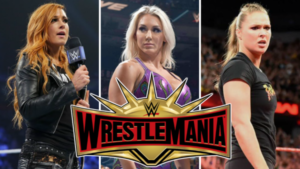 Checkout one my previous blogs on WWE