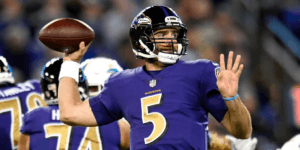 During yesterday’s weekly Monday press conference, Head Coach John Harbaugh discussed the condition that Quarterback Joe Flacco was in, after suffering a concussion in Thursday night’s 40-0 victory over the Miami Dolphins. Miami linebacker Kiko Alonso flew into Flacco’s head as Joe was sliding to give himself up on a quarterback scramble.

Alonso was flagged for unnecessary roughness for the illegal hit after the play. The NFL is reviewing the hit by Alonso. If Flacco is able to return this week against the Tennessee Titans it would show just how tough he is. Harbaugh had this to say about Joe’s chances of playing on Sunday (via @Ravens).

Coach Harbaugh also discussed the possible return of running back Danny Woodhead to practice this week. Woodhead suffered a hamstring injury on the first drive of the season in Cincinnati. Woodhead looked to be huge part of the offense this season, as he made a pretty big impact on his only drive of the season by catching three passes for thirty-three yards. Woodhead is eligible to return in the Week eleven matchup against the Green Bay Packers at Lambeau Field (via @Ravens).

RB Danny Woodhead (hamstring) has a chance to return to practice this week, Coach Harbaugh said.

“That’ll be a decision that’ll have to be made and it will be like a roster wide type of decision. We’ll have to compare all of our options, try to keep the players that give us the best chance to make us the strongest team.”

Having five running backs on the active roster is hard to imagine. The possibility of one of Terrance West, Javorious “Buck” Allen, or Bobby Rainey getting cut is likely. It is just a matter of who gets the short end of the stick.