The Washington Capitals and captain Alex Ovechkin have signed a five-year, $47.5 million dollar contract. Ovechkin has spent his entire career with the Capitals and is their longest tenured captain. Ovechkin was originally drafted number one overall in the 2004 draft by the Capitals.

Ovechkin will be chasing down the NHL goal scoring records, currently he has 730 career goals. Ovie would be a lot closer if he did not lose time in his prime for a year and a half of lockouts. Ovies rookie season would have been in 2004-2005, which he may have put up an easy 40-50 goals. Ovies rookie season in 2005-2006 he scored 52 goals. Ovie score 32 goals during the lockout shortened 2012-2013 season in which he only played 48 games. Ovie has also lost time from two Covid shortened seasons. All in all Ovie would be an estimated 80 to 100 goals closer to Wayne Gretzky’s record without all the time missed.

The Capitals have gotten everything they could ever ask for already from Alex Ovechkin. While the Capitals may have wanted more Stanley Cups, when Ovie and the Capitals finally brought the Stanely Cup to DC in 2018 it made it even more special. Ovie has become an example for athletes of how to become a leader on and off the playing field.

Ovechkin has been a leader off the ice, doing charity work world wide and promoting hockey. On Ovie and his wife’s social media they post about their family and children non-stop.

It has been a pleasure getting to watch such an amazing career, the next five years Ovie will continue to hit NHL milestones. Here is the Capitals press release. 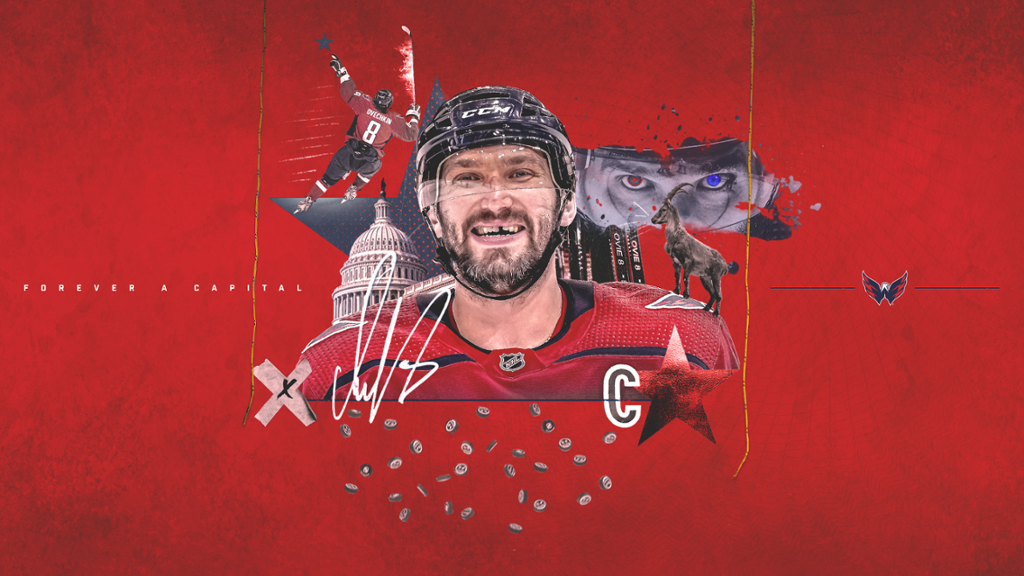 The Washington Capitals have re-signed captain Alex Ovechkin to a five-year, $47.5 million contract, senior vice president and general manager Brian MacLellan announced today. Ovechkin’s contract will carry an average annual value of $9.5 million. Ovechkin – who will enter the 2021-22 season in sixth place on the NHL’s all-time goals list – is under contract through the 2025-26 season.
“Alex is a world-class athlete who will forever be regarded not only for leading the team to achieve our ultimate goal of winning the Stanley Cup, but also for inspiring the next generation of fans and youth players,” said Monumental Sports & Entertainment Founder and CEO Ted Leonsis. “The impact Alex has had on hockey in D.C. extends well beyond Capital One Arena. His performance on the ice has undoubtedly sparked countless new fans of the game and inspired more youth players to lace up skates of their own. Off the ice, Alex’s impact is equally unmatched. Not only is he committed to the franchise, but also to the community, and we look forward to seeing him in the Capitals uniform for years to come.”
Ovechkin, the franchise leader in games played (1,197), goals (730) and points (1,320), captained the Capitals to their first Stanley Cup championship in 2018. Since 2005-06, Ovechkin’s rookie season, Washington ranks second in the NHL in wins (689) and points (1,524).
“Alex is the face of our franchise and is committed to this organization and this city,” said MacLellan. “Alex embodies what our franchise is all about, and we’re thrilled that he will continue his career in the Caps uniform for the next five years.” 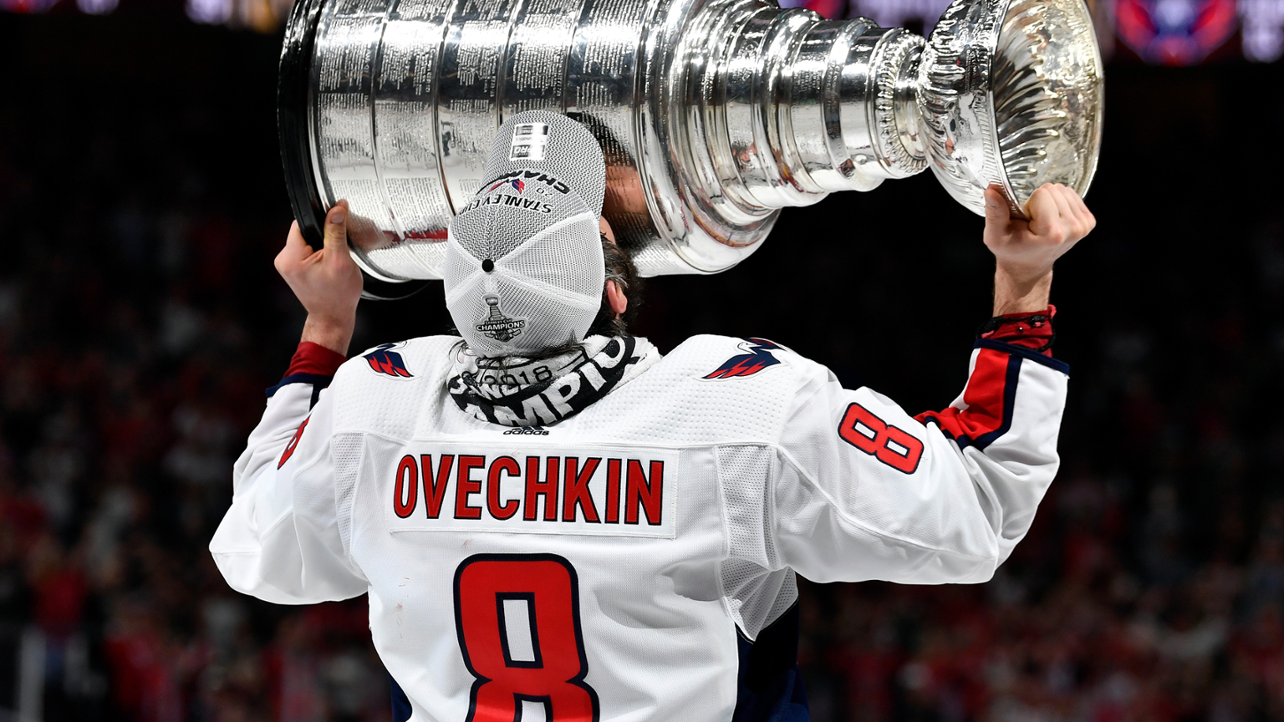 The final year of the contract will mark Ovechkin’s 21st season with the Capitals. In Washington, D.C., sports history, only Washington Senators pitcher Walter Johnson and Washington Football Team cornerback Darrell Green have played at least 20 seasons with their respective team (Johnson: 21 seasons from 1907 to 1927; Green: 20 seasons from 1983 to 2002).
Ovechkin, who passed Mike Gartner (708g) and Phil Esposito (717g) on the NHL’s all-time goals list during the 2020-21 season, is two goals shy of passing Marcel Dionne (731g) for fifth place and 165 goals shy of passing Wayne Gretzky (894g) for the most in NHL history.
Ovechkin will seek to become the third player in NHL history to reach the 800-goal mark, along with Gretzky and Gordie Howe (801g). Should he maintain his career 0.61 goals per game rate, the highest rate in NHL history among players with at least 700 goals, Ovechkin would score his 800th career goal in his 1,312th career game. Gretzky reached the mark in his 1,116th career game (March 20, 1994), while Howe accomplished the feat in his 1,748th career game (Feb. 29, 1980). With Ovechkin signed with the Capitals for the next five seasons, he would need to average 33 goals per season during that span to pass Gretzky as the NHL’s all-time goal-scoring leader. 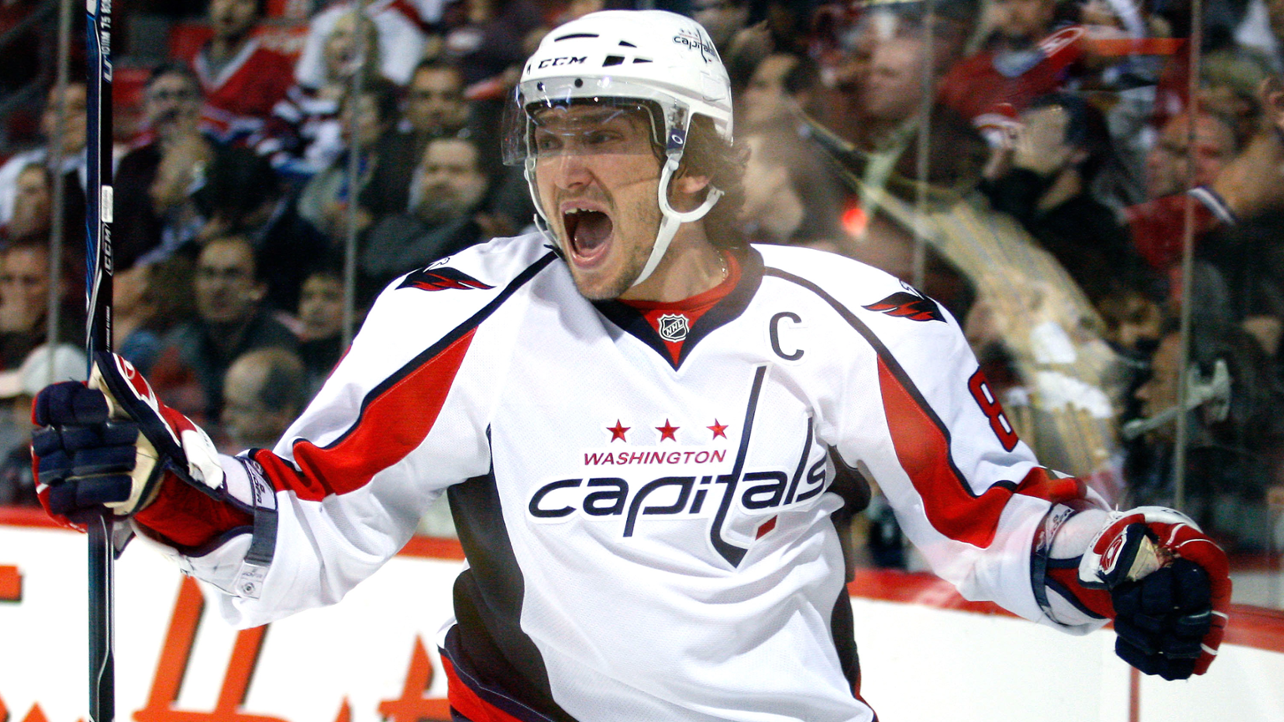 Ovechkin scored 24 goals in 45 games in 2020-21, equating to a 43-goal pace over an 82-game season. With 24 goals last season, Ovechkin became the fourth player in NHL history to record 16 consecutive 20-goal seasons at the start of his career, joining Dionne (17), Jaromir Jagr (17) and Mats Sundin (17). The 2020-21 season marked the first season in which Ovechkin did not reach the 30-goal mark, leaving him tied with Gartner and Jagr for the most consecutive seasons in NHL history with at least 30 goals (15). Ovechkin and Gartner are the only players to begin their careers with 15 consecutive 30-goal seasons. Additionally, Ovechkin only trails Gartner (17) for the most total 30-goal seasons in NHL history.
Ovechkin’s 48 goals during the 2019-20 season tied for the NHL lead, giving him an NHL record ninth career Maurice “Rocket” Richard Trophy. No other player has won the Maurice “Rocket” Richard Trophy more than twice since its creation in 1998-99. It marked the seventh time Ovechkin had received the trophy in the last eight seasons. Ovechkin became the third player in NHL history to lead the League in goals at the age of 34 or older, joining Bill Cook (1932-33: 28g in 48 games) and Howe (1962-63: 38g in 70 games). Additionally, Ovechkin became just the fourth player in NHL history to score 48 or more goals in a season at age 34 or older, joining Jagr in 2005-06 (54g; age 34), Johnny Bucyk in 1970-71 (51g; age 35) and Teemu Selanne in 2006-07 (48g, age 36). Of Ovechkin’s 48 goals scored in 2019-20, 35 were scored at even strength, the fourth-highest total of his career. His 48 goals were also the second-most Ovechkin has scored in a single season when scoring 13 or fewer power play goals (2009-10: 50g, 37esg, 13ppg).
Ovechkin scored his 700th career goal on Feb. 22, 2020, against the New Jersey Devils, becoming the eighth overall and second-fastest player to reach the mark. Ovechkin reached the milestone in his 1,144th career game, trailing only Gretzky (886 games). 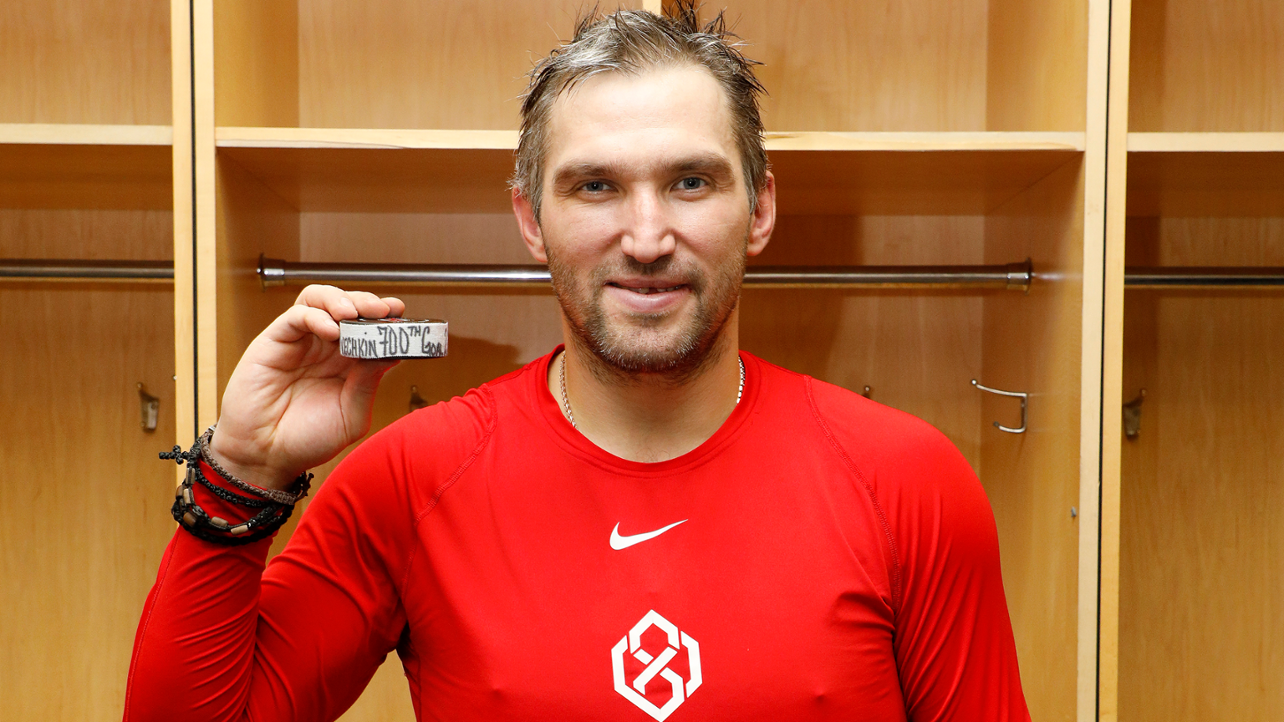 With 13 games remaining prior to the 2019-20 season suspension, Ovechkin was on pace for 57 goals, which would have been the second-highest total of his career, his highest total since 2007-08 (65) and the ninth time Ovechkin would have reached the 50-goal mark. Ovechkin was on pace to join Gretzky and Mike Bossy as the only players in NHL history with nine 50-goal seasons. He would have also joined Esposito as the only players in NHL history to record at least three 50-goal seasons after their 30th birthday (Esposito: four). Additionally, Ovechkin would have become the second-oldest player in NHL history to record a 50-goal season, behind Buyck (35 years, 308 days old at the conclusion of the 1970-71 season). In addition to being one 50-goal season shy of tying Gretzky and Bossy for the most in NHL history, his 11 career 40-goal seasons are also one shy of Gretzky for the most in NHL history.
Ovechkin has played in 1,197 of the Capitals’ 1,239 games (96.6 percent) since making his NHL debut on Oct. 5, 2005, marking the fifth-most games played in the NHL during that span. Ovechkin is one of seven players in NHL history to play their first 16 seasons with the same team and appear in at least 96.6 percent of their team’s regular season games. Ovechkin has played in 435 of the Capitals’ last 450 games, seven of which were missed due to injury, and has missed just 17 games in his entire career due to injury.
Since entering the NHL in 2005-06, Ovechkin leads the League in goals (730), power play goals (269), power play points (499), game-winning goals (116), overtime goals (24) and ranks second in points (1,320). Ovechkin holds a 244-goal lead over the next highest scorer during that span (Sidney Crosby: 486). Despite beginning his NHL career in 2005-06, Ovechkin leads the NHL in goals since the start of the 1992-93 season. He is the NHL’s all-time leader in overtime goals (24), ranks second in power play goals (269) and shots (5,727) and fourth in game-winning goals (116). 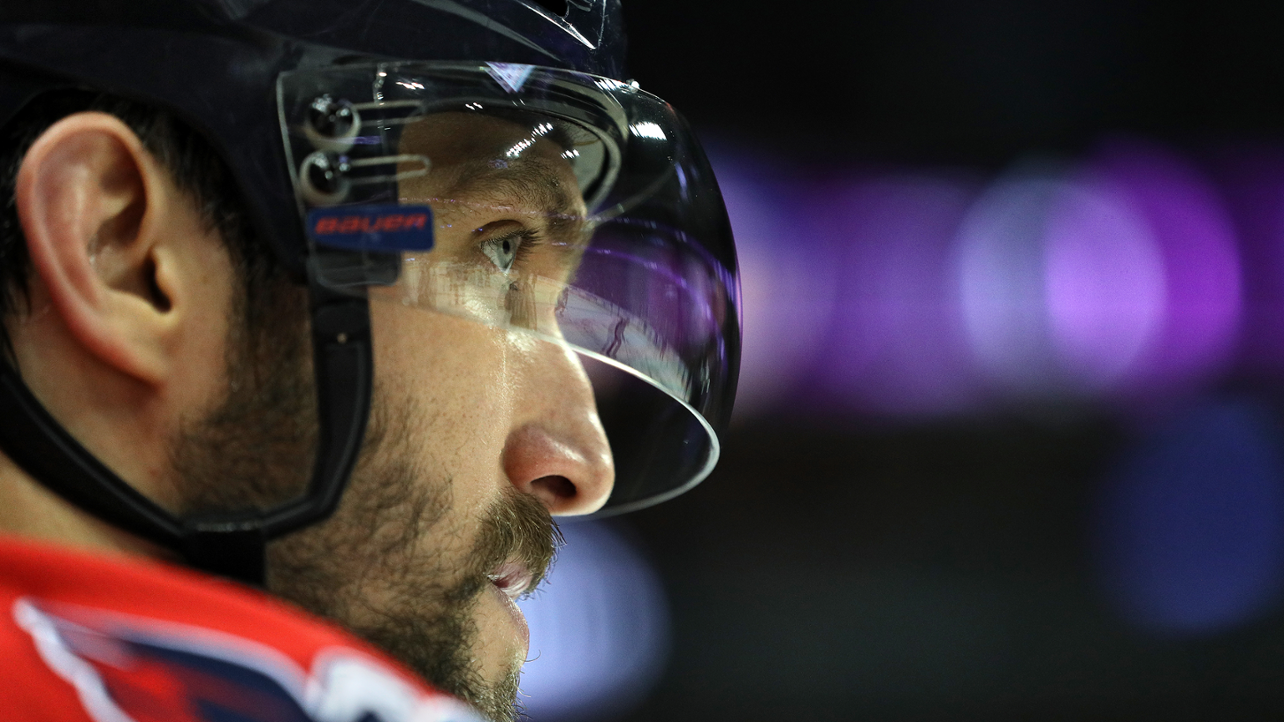 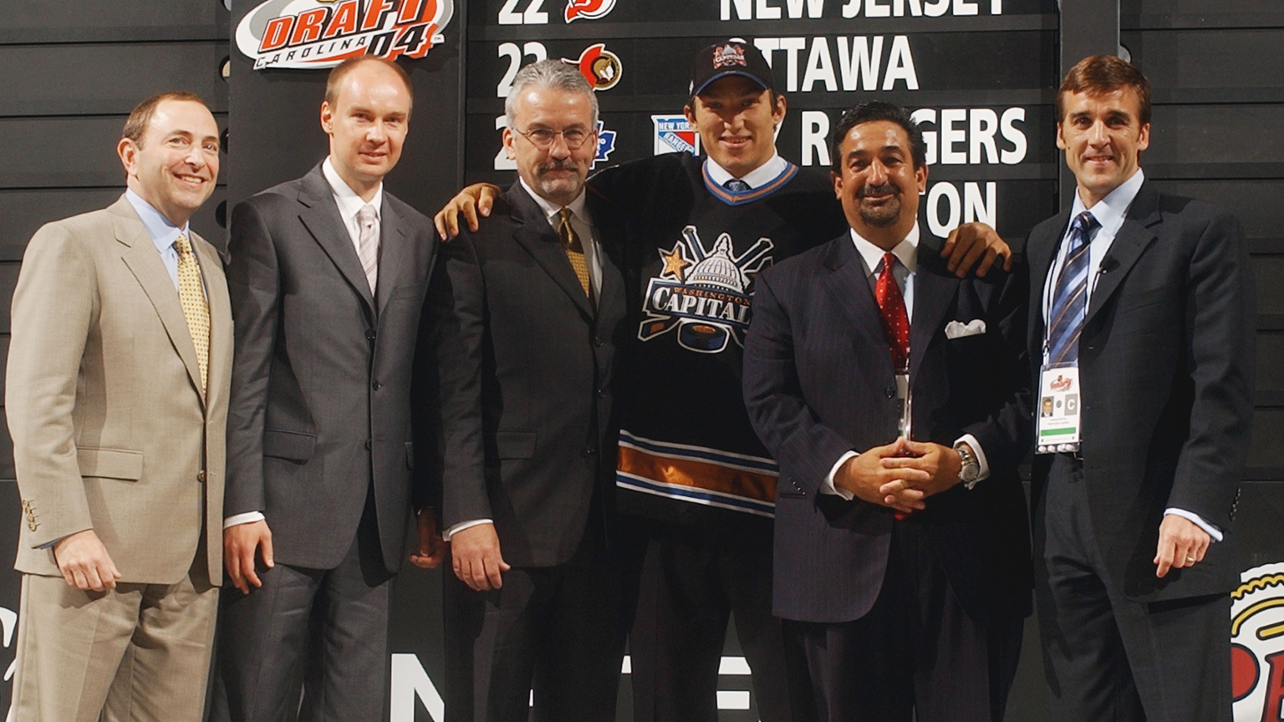