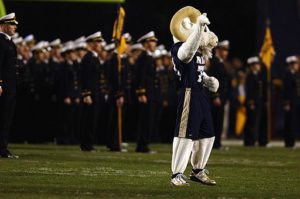 Navy Midshipmen and Bill the Goat

The Navy Midshipmen beat the Lehigh Mountain Hawks, 51-21, today in Annapolis. Malcolm Perry and the Navy defensive line were the stars of the day as the Midshipmen took control early and kept it all day long.

Perry rushed for 223 yards and 3 TDs, finishing with an impressive average of 11.7 yards per carry. While the junior QB wowed with his feet, Perry showed improvement with his arm. Although he completed only two passes, one was a 49-yard pass to C.J. Williams that soon led to a touchdown.

Other outstanding performers included C.J. Williams (sophomore SB) who had three catches for 104 yards and three carries for another 41 yards. Myles Fells (sophomore SB) had a 52-yard run for a TD on his first career carry. Zach Abey scored another rushing TD, his sixth of the season. Bennett Moehring added three field goals to the rout.

In the fourth quarter, head coach Ken Niumatalolo fielded a number of reserves, including Dalen Morris at QB. The play was sloppy at the end with a number of penalties that led to Lehigh scoring late.

Overall, it was an impressive, though expected, win by the Navy Midshipmen over a FCS school all knew they should beat. The Mids could have stumbled over Lehigh but didn’t. Well done.

Next up for Navy is SMU. Kickoff is at noon this Saturday, Sept. 22.