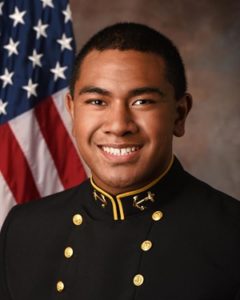 Jarvis Polu graduated from Liberty High School in Henderson, NV in 2014. Graduating with honors, Polu also lettered in football and track & field. A regional qualifier in shotput and discus, it was on the gridiron that the young man truly shined.

After attending the Naval Academy Prep School during the 2014-15 academic year, Polu was put straight to work his freshman year.

He saw playing time in all 13 games as backup defensive end. Recording his first collegiate sack against Army, he ended the year with 5.0 tackles, one tackle for loss and one sack.

In Navy’s season opener against Fordham, Jarvis Polu made his first start.

The sophomore never looked back.

Recording a career-high nine tackles against Army, a QB hurry in the AAC Championship Game versus Temple, Polu would finish the year with 53 tackles, 3.0 sacks and 4.0 tackles for loss.

Continuing his streak of consecutive starts, Polu’s much-anticipated junior year saw strong numbers but not the outstanding stats for which many pundits had hoped. His final numbers were: 32 tackles, 3.0 tackles for loss and half a sack.

Despite missing spring drills due to off-season surgery, Polu enters his senior campaign as one of the leaders of Navy’s defensive line. Along with Josh Webb at DE and Jackson Pittman at nose guard, Navy’s defense looks to be strong in 2018.

Having played in all 40 games during his three years at Navy, head coach Ken Niumatalolo will be counting on Jarvis Polu’s experience, toughness and proven combative edge to lead the Midshipmen through a tough AAC schedule.