By the Numbers: The Navy “Rout” of Lehigh 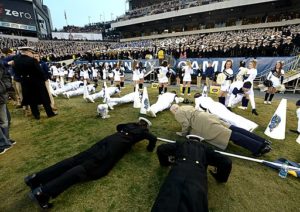 At one point, Navy scored 41 unanswered points. QB Malcolm Perry ran for 223 yards and 3 TDs. The defense forced five turnovers. Bennett Moehring kicked three field goals for the Mids. It was a rout.

Ivin Jasper concurred, “We have a standard on offense. It’s about playing clean football and we didn’t do it.” The OC then added, “Points-wise and yards-wise it was Navy football, but as far as being detailed and executing it was not.”

Dale Pehrson didn’t mince words either. “We had a lot of arm tackles, a lot of guys who got run over or run through.” The defensive coordinator then looked ahead, “We’re going to face a bunch of good backs… We’re not going to hold up against some of the offenses we’re going to see this season if we continue to tackle that way. We have to get a lot better.”

So, who is right? The numbers or the coaches? Let’s have a look at the stats and find out.