Former Maryland Player Diamond Stone was named in today’s news about the FBI probe into college basketball impropriety. Per Yahoo Sports: “Diamond Stone, at the time a freshman at Maryland, received $14,303 according to the documents.” This news dump is reportedly only a fraction of the allegations, which are expected to rock the college basketball landscape, set to become public.

The school has now released a statement: 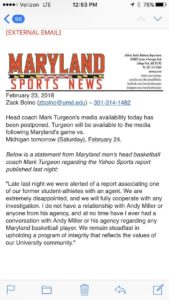 What does this mean for Maryland?

Luckily for the Terps, this particular news dump was strictly about players’ involvement with one particular agency. The allegation does not say whether or not Maryland had any knowledge or involvement in the payment, and they’ve gotten out ahead of it by denying any part in the impropriety.

Of course Maryland is not out of the crosshairs quite yet, as this was just a portion of the allegations in the probe. However, due to their historically clean record of recruiting, combined with the fact that no evidence of wrongdoing has been shown yet, expect light to no sanctions at this point from the NCAA.

The school has now been subpoenaed by the federal investigation that is currently being done in accordance with a federal grand jury in New York. The school released the subpoenas Friday, along with a statement of assurance that they are cooperating with any and all requests of the ongoing investigation.

Luckily for the school, they have not yet been publicly implicated in any wrongdoing in the investigation, as their cooperation thus far seems to be providing information on Diamond Stone. Stone is said to have received payments from a third-party agency during his time at Maryland. Whether or not Maryland knew about or was even involved in these illegal payments is yet to be publicly known.