Three Keys For A Navy Victory Against Cincinnati 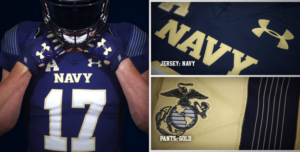 asn’t played Cincinnati since 1956.  In fact, when the two teams meet on Saturday in Annapolis, it will only be the third time these two schools have met on the football field.  Navy holds a 2-0 advantage after winning that ’56 game 13-7.

Here are my three keys to ensure Navy’s third consecutive victory to being the 2017 campaign and go to 2-0 in the American Athletic Conference West standings.

Key #1 … Put extra pressure on Cincinnati QB Hayden Moore.  Through 3 games, Moore has only completed 50.5% of his pass attempts (56/111).  He has thrown for five TDs, but he has also thrown four INTs too and his longest pass completion is only 27 yards.

Key #2 … Effective running when Navy is on offense.  There’s no doubt that Navy is one of the best rushing teams out there in the FBS (305 rushing yards per game).  One of the best ways to wear down a defense, particularly with temperatures expecting to be in the mid-80s in late September, is to run the ball effectively and have long, sustaining drives.

Key #3 … Navy must stay aware on defense against the run.  The only way any team can open up its passing offense is through an effective running game.  Something, again, Cincinnati has yet to showcase in it’s first three games.  The Bearcats are averaging 101 rushing yards per game and only have two rushing touchdowns (Navy has seven rushing TDs in only two games).

My prediction … Abey will rush for at least three touchdowns and have one TD through the air … Navy once again should run all over it’s opponent and should win the game 34-10.