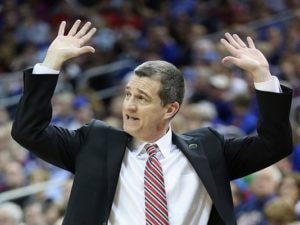 Our beloved Terrapins have hit a rough spot.  Maryland has proved they can play in tough road games, but can’t finish the job.  After losing to Indiana by just three, Maryland has fallen out of the predicted NCAA Tournament bracket.  However, there is still a chance Maryland can go dancing, and they deserve much more credit than they have gotten.

Everyone knows Maryland has been destroyed with injuries.  Justin Jackson was a projected lottery pick in the upcoming NBA Draft.  Bruno Fernando started off the season with an ankle injury, and sprained it again against Indiana.  Ivan Bender is Mark Turgeon’s smartest big man.  He ran all the sets fluently and gave Maryland a deeper frontcourt rotation.  None of this is an excuse whatsoever.  But you have to think that a couple of the losses this season would be W’s if Maryland had Jackson, let alone the addition of Bender.  The players and fans know it.  The committee knows it.  They just don’t care.

Maryland sits at 15-7 and 4-5 in the Big Ten.  That has them in the middle of the pack, now tied with Northwestern in conference play.  Ohio State, Michigan State, Purdue, and Michigan should be locks for the Tournament. Maryland and Nebraska are the only other two teams with a chance for a postseason berth, Maryland has the edge over the Cornhuskers.

If you go through all of Maryland’s schedule, they do not have a bad loss.  Syracuse is 14-6, Purdue is 19-2, Michigan State is 18-3.  The only questionable loss is to St. Bonaventure, and even they are 13-6 and were projected to make a run at the Atlantic 10 title.  It’s not that the Terps lose to bad teams, it’s the fact they can’t beat anyone big.  Butler is the only key win and that’s not going to be enough to sway the selection committee into giving the Terps a chance in March.

So what does Maryland have to do to get in?

WIN.  It’s incredibly simple.  Maryland will host the Spartans on Sunday then travel to Purdue next Wednesday.  Michigan State is one of the best teams in the nation.  However, when their shots aren’t falling, anyone can stick with them.  Maryland has also always played them tough at the XFINITY Center.  This could be the key win that helps Maryland get back on track.

What if they lose to Michigan State?

It’s still FINE.  With all of Maryland’s road troubles, they would make it a lot easier on themselves if they can take down MSU at home.  If they can’t however, a big road win against Purdue is even better.  Other than Michigan State and the second half of the Ohio State game, each road loss Maryland has suffered has been a close contest.  If the Terrapins can finally close out one of those tight endings, especially against Purdue, that’s a huge win that would help them.

Now, what if they lose to both teams?

Then it’s going to come down to the last possible minute.  Maryland would HAVE to win out, and probably take down one or two teams in the Big Ten Tournament as well.  No one wants to have their back up against the wall.  Maryland would have to end conference play on a seven game win streak including road wins over Penn State, Nebraska and Northwestern.  Also a home victory over Michigan on February 24th.  Hopefully Maryland can top either MSU or Purdue to give them breathing room so they aren’t forced to finish perfect.

Maryland will take down the Spartans at home and most likely get bullied by Purdue in West Lafayette.  I think the Terps will finish the year going 7-2 with wins over MSU, Michigan, at Nebraska and at Penn State.  That would put Maryland at a solid 22-9 and 11-7 in the Big Ten.  Key wins over Butler, Michigan State, Michigan.  Still no bad losses.  That should be enough to get the Terps into March Madness.  A little help in the Big Ten Tourney wouldn’t be the worst thing either.

Regardless of what happens, people constantly blame Turgeon, or blame the injuries, or blame the basketball God’s.  Whatever/whoever they can blame, they will.  It’s common sports ignorance and built up negative emotion that turns ‘die hard Terp fans’ into absolute doubters.  The point of this article is to give those level-headed Maryland fans a sense of relief knowing that the Terrapins can still make the Tournament.  But as much of a fan that I am, if Maryland doesn’t make the Big Dance, it’s not the end of the world.  The things Maryland has had to go through with all the injuries and illness’s would knock down even a Kentucky or Duke program.  Also, everyone does know that the  leaders, Cowan and Huerter, are still only sophomores right? That Ceko and Nickens are the only true seniors?  If Maryland doesn’t make the Tournament, it will be upsetting, yes.  Should Turgeon get canned because he’s had to deal with a 7-8 man rotation all year? Not a chance in Hell.

Good thing Maryland will make the Tournament this season and only get stronger for next year.  If not, feel free for all of you to throw your blame on me.  We all know someone has to take it.

Terps and Michigan State on Sunday.  Get ready for the upset.