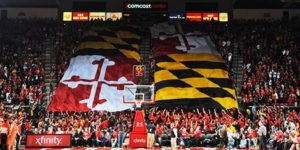 Maryland will tip-off against Division-III Catholic University at 7pm this evening, at the XFINITY Center.  Another game the Terps should win, and should win big.  The Terrapins took down Ohio and Gardner-Webb by 20+ points in their last two contests, and will look for nothing less against Catholic tonight.

Maryland was without Bruno Fernando last game after he suffered a sprained ankle and will most likely miss tonight’s game as well.  Justin Jackson also missed last game, with an illness, but should be ready to go in this matchup.

Maryland ran all over Gardner-Webb and had an impressive, for this team, amount of turnovers with 11.  Hopefully the Terps are starting to learn how to play with each other more fluently, and the turnover issue will start to slow down.

Darryl Morsell and Joshua Tomaic both had their highest point total in a game this season. Morsell dropped 18 and Tomaic added 9.  Tomaic got more minutes because, as mentioned before, the Terps were without their two leading rebounders in Jackson and Fernando.  Tomaic may see more floor time tonight after producing heavily in his last game, especially if Bruno is out.

Senior Michal Cekovsky has played outstanding in his past few games and will look to continue that for the remainder of the year.  Maryland is including him more in the offense, but the most impressive part of Cekovsky’s recent success is his ability to play physical and create his own shot.  The 7-footer is expanding his post game with left and right handed hook shots, and is battling for boards on both sides of the court.  If Cekovsky can stay solid, Maryland will be more successful when Big Ten play approaches.

Senior forward Jay Howard is Catholic’s best player.  Howard is posting 24.7 points per contest while shooting 58% from the floor.  He’s only taken 2 shots from deep, meaning he will have to battle Maryland’s bigs down low.  Howard plays bigger than he is, standing at 6’4.  Basically, he’s a guard going up against Maryland’s trees of Ivan Bender, Cekovsky, Jackson, Tomaic and Sean Obi, all at 6’9 and up.

A win for the Terrapins won’t look great for the selection committee, just like their last couple games.  But a win will look a whole lot better than a loss to a Divsion-III team at home.  Maryland is showing that they are winning games that they SHOULD win, with an exception of maybe St. Bonaventure who is still supposed to finish at the top of the A10.  All Maryland has to do is win these cupcake games to help their record out for their Big Ten competition.