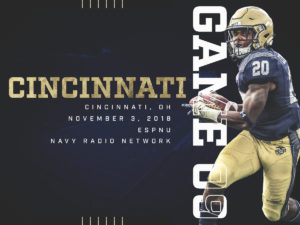 The Cincinnati Bearcats (8-1, 4-1) dominated the Navy Midshipmen (2-7, 1-4) for a 42-0 win Saturday afternoon at Nippert Stadium. With the loss, Navy will not be bowl eligible this season. The sixth loss in a row for the Mids also erases any chance for a winning season in 2018.

In a game with few Midshipmen highlights, Zach Abey ground out some tough yards in his first start at quarterback this year. While the final numbers were not impressive for the passer (47 yards in the air, 37 on the ground), Abey’s grit in the blowout certainly starred. On the defensive side, Anthony Villalobos recorded a sack and Hudson Sullivan ended the day with ten total tackles.

For the Bearcats, Desmond Ridder had another strong game with 178 yards passing and 66 rushing. Michael Warren ran for two TDs, and Rashad Medaris had four catches for 82 yards.. Cincinnati’s defense had a monster of a day, finishing the game with nine tackles for loss and five sacks.

Here’s a look at the final team numbers for Navy and Cincinnati.

Up next for Navy will be #12 UCF next Saturday in Orlando.