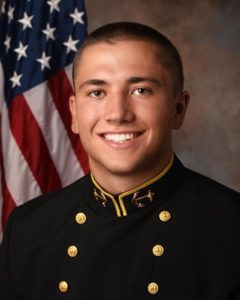 Hudson Sullivan graduated from Bishop Ireton High School in Alexandria, VA in 2014. As a three-time All-State (VA) linebacker with the Cardinals, Sullivan led the state in tackles his senior year with 79 in five games until injuries sidelined him.

In his first year of eligibility, Sullivan played in five games for the Midshipmen. Most of his game time was on special teams.

Sullivan played in ten games for Navy as a sophomore. He started four. Despite missing several games due to injuries, Sullivan finished the year with 46 tackles, including one for loss and one forced fumble.

Shortened by injury, Sullivan’s junior campaign saw him start all six games in which he played. Despite the limited game time, Sullivan ended the year with 40 tackles, including two for loss and one sack.

Hudson Sullivan and fellow linebacker Taylor Heflin have shined on defense for Navy. As a result, their names have become quite familiar to this year’s Midshipmen fans.