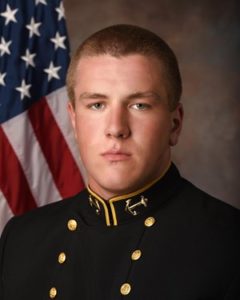 Taylor Heflin graduated from Wayne County High School in Jesup, GA in 2014. During his time as a Yellow Jacket, Heflin excelled at both football and track & field, captaining both teams. In football, he led Wayne County High in tackles both his junior and senior years. Named an All-Regional player twice and an Honorable Mention All-State once, Heflin also won the Wendy’s Heisman Award in 2013.

In track & field, he was an All-State selection both his junior and senior years and a Regional Qualifier in shot put and discus his sophomore campaign. Remarkably, Heflin also found time to serve as Class President in his final two years at the school.

After not seeing any varsity action his freshman year, Taylor Heflin played in all 14 of Navy’s games in 2016. Heflin made his first start for the Midshipmen in the AAC Championship Game against Temple, subbing for Hudson Sullivan. The sophomore would finish the season with 32 tackles and one fumble recovery. Heflin had 12 tackles, his career-best, against Army.

Having to sit out two contests due to injury, Heflin played in 11 games for Navy in 2017. His year-end statistics included: 18 tackles (including one tackle for loss), one forced fumble and one fumble recovery.

As long as Heflin remains healthy, the Wayne County High School grad should put up monster numbers by the end of his senior campaign at Navy.