International Fight Week has brought a start studded card to Vegas for UFC 239 “Jones vs. Santos”. Even the Prelims are stacked and packed and that makes all of us fight fans the real winners today. Let’s take a peek and get my Prelim predictions for tonight’s red hot fights.

Gilbert Melendez (22-7) vs. Arnold Allen (14-1)
This one has me baffled. Gilbert has lost 4 straight and has been spending much of his time as a broadcaster not a fighter with only 4 fights in 4 years.Allen has looked sharp and continues to grow a s a fighter. AA has won 7 straight and is looking to tap Gilbert back to the booth and cement that he belongs among the top talent in the UFC.
Prediction: Arnold “Almighty” Allen by Submission 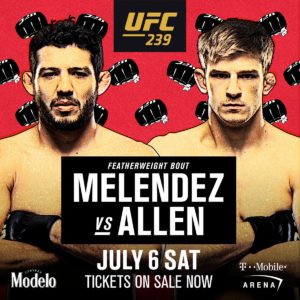 Marlon Vera (15-5-1) vs. Nohelin Hernandez (10-2)
Hernandez has a 2″ reach advantage in striking but has yet to show power that scares you. On a 4 fight win streak he looks to make a name for himself against Vera, After back to back loses about a year and a half ago Marlon has won 3 straight and looked like he is back to form. I think this one is a relative easy night and I see a big finish.
Prediction: Marlon “Chito” Vera by way of TKO

Claudia Gadelha (16-4) vs. Randa Markos (9-6-1)
Looking at the records you may jump to say Gadelha, understandably so. Markos however looked strong in her last fight against Angela Hill. Randa has been to see a Fight psychologist and seems to have her mind right and that makes our “Quiet Storm” very dangerous. Both fighters most recent loses came at the hands of Nina Ansaroff and this is a fabulous match up fight. This one will be fun to watch as I really like both og these fan favorite fighters.
Prediction: Claudia “Claudinha” Gadelha by Decision 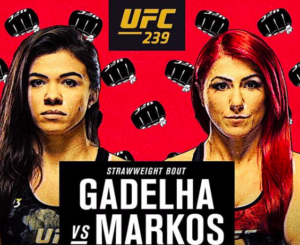 Alejandro Perez (21-7-1) vs. Yadong Song (14-4)
On paper this one looks easy. Perez is the more experienced fighter, Perez (#14) holds a much higher world ranking than Song (#44). Perez comes off a loss to Cody Stamann but had won 6 straight prior to that fight. Perez is the odds favorite in Vegas. All screams Perez right? Not so fast Song has won 6 straight and looked amazing doing it. While Vegas likes “Turbo” Perez I am calling an upset in this one.
Prediction: Yadong “The Terminator” Song via Decision

Edmen Shahbazyan (9-0) vs. Jack Marshman (23-8)
Edmen puts his undefeated streak on the line against a wily veteran with over 30 pro fights in Marshman. The 21 year old “Golden Boy” is a knockout artist finishing 7 of his 9 fights. Marshman aka “The Hammer” is coming off a big win against fellow UFC veteran John Phillips but has dropped 3 of his last 5 fights overall.
Prediction: Edmen “Golden Boy” Shahbazyan via TKO 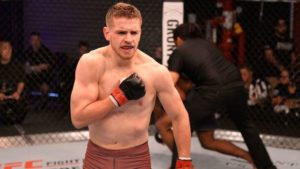 Ismail Naurdiev (18-2) vs. Chance Rencountre (13-3)
While Ismail is about 4″ shorter than Chance the reach remains the same and the power nod undoubtedly goes to Ismail. I see this as an interesting match up as the “Black Eagle” makes a living tapping people out while “The Austrian Wonderboy” looks to knock them out. Should be an exciting fight as both men excel in their preferred skill set. I see this going to the power puncher.
Prediction Ismail “The Austrian Wonderboy” Naurdiev via TKO

Pannie Kianzad (11-4) vs. Julia Avila (6-1)
Both are talented fighters and have a shot at walking away with a win tonight. Personally I think Pannie and her “Banzai” attitude cause problems for Avila. With that said I am still picking the “Raging Panda” in a good fight.
Prediction: Julia “Raging Panda” Avila via Decision 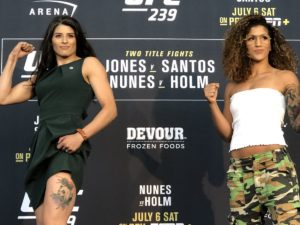 Check out another UFC article of mine here