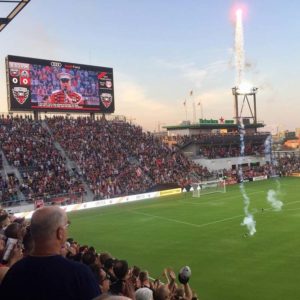 In one of the most unprecidented Cinderella turnarounds in MLS history, D.C. United has a chance to do something they haven’t done since 2016, qualify for the MLS playoffs. Kickoff is at 3 p.m. and you can catch the game on WJLA 24/7 News and the CW Richmond.

In the final home game of the regular season at beautiful Audi Field on a Sunday autumn October afternoon, D.C. United can make the playoffs with a win over their Eastern Conference foes New York City Football Club.

“We’re playing a very good team, one of the best teams in the East. My hope is that we have a great turnout which I’m pretty sure we will and we can solidify a playoff spot and treat our fans to another home win,” D.C. United head coach Ben Olsen said after the club’s 1-0 win over Toronto FC on Wednsday night.

How good is NYCFC? They sit at the third seed in the Eastern Conference with 53 points and a 15-8-9 record. In D.C. United’s previous meeting with NYCFC, they had a 1-1 draw at Yankee Stadium. D.C. United, meanwhile, is 13-11-8, good for 47 points in the sixth and final playoff spot in the East. They are four points ahead of the Montreal Impact, who face tremendous pressure on Sunday afternoon against Toronto FC.

A win would give D.C. United a clean sweep over the last eight days, a nine-point week. Additionally, goalkeeper Bill Hamid will be going for his thrid consecutive shutout. They’ve done a good job all year protecting their fortress as they carry a 12-2-2 record at home, easily the best in the MLS. DCU also looks to extend their point streak to eight games.

Even if the home team loses on Sunday, there’s still a possibility that they can get into the big dance. Either a win in the season finale in Chicago or if Montreal drops one of their remaining two games on the season. But in a magical season on the Navy Yard waterfront in Southeast, D.C., Washington’s home soccer team would like to clinch their playoff spot in front of the decked out crowd in black and red.

Wayne Rooney was the difference in D.C. United’s 1-0 win over Toronto FC. His free kick goal turned out to be the game-winner putting DCU in the great position they’re in right now.

Since his midsummer debut which also happened to be the inagural game at Audi Field, Rooney has scored 10 goals and has been the catalyst in the club’s turnaround. Three of those 10 goals led to critical victories.

David Villa was the X-Factor in the last meeting between New York City and D.C. His game-tying goal prevented DCU from getting three points. He is the face of NYCFC in the middle of the club’s fourth season.

Villa leads the club in goals with 12. Three of them are game-winners. It’s going to be another great matchup between two faces of their respective franchises.