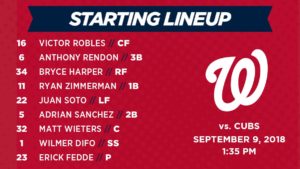 Here’s the Washington Nationals lineup for today’s series-finale against the Chicago Cubs.

After a long, memorable night at the ballpark last night, the Nationals return to the field with Erick Fedde (1-3, 6.00 ERA) on the mound. In his last start, Fedde struck out seven in five innings pitched.

The Cubs give the ball to Mike Montgomery (4-5, 3.85 ERA). Montgomery is still working his way back from a stretch on the DL. In his last start, he only went four innings, giving up two runs.