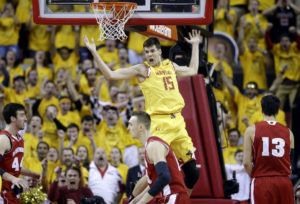 Maryland took down Ohio last night, 87-62.  Maryland dealt with some turnover troubles again, but the balanced scoring from the Terps got the job done once again.

Michal Cekovsky had his best game of the year, going 6-6 from the floor for 15 points.  Cekovsky also added 8 boards and 2 blocks.  Kevin Huerter led the Terrapins in scoring with 17, shooting 4-8 from deep along with 6 rebounds.

The Terps won, but freshman stud Bruno Fernando went down with an ankle injury late in the second half.  His injury is ruled as an ankle sprain and there has been no update on how long he will miss.  If it had to happen, it’s better it happened yesterday, rather than in Big Ten play.

Justin Jackson was not in the starting five, as he missed the end of practice with an illness.  Freshman Darryl Morsell got his first career start in his place.  Morsell finished with 6 points, 4 rebounds and 3 assists in the first half.

It was an exciting game, as Cowan Jr. hit Fernando with two big ally-oop jams and the Maryland walk-ons tallied 9 points.  Reese Mona had 4 and Travis Valmon added 5.