Terps Lose a Heartbreaker in Michigan

Maryland suffered arguably its worst loss of the season last night at #23 Michigan, falling to the Wolverines 68-67. The Terps controlled the game in the first half, holding Michigan to just 20 points and less than 35% shooting in the frame. The 10-point lead they took in halftime was immediately erased, however, as Michigan stormed back to start the half on a 10-0 run in the first few minutes. From then on, the game was tight until Maryland found itself down 10 late in the half. The Terps showed life for the first time since the beginning of the game and went on a 18-7 run, capped by a Kevin Huerter 3 to take a 1-point lead with 3.2 seconds left. The game seemed over at that point, but Maryland allowed Michigan’s best player to find himself open on an inbounds and promptly fouled him. The free throws put the Wolverines ahead for good, and made the comeback moot. 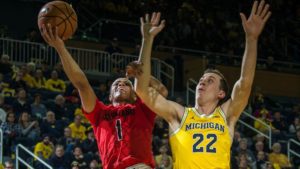 This game definitely highlighted the team’s inconsistency and inability to play with a lead. This is likely caused in large part due to the absence of Justin Jackson, who is the most capable perimeter defender on the team. Without him, the Terps are lacking any kind of man discipline on defense, and they give up too many open 3s. This has led to the snowball of momentum we’ve seen from other teams on the road like Michigan State, Ohio State, and Michigan.

Maryland will look to regain some confidence after losing 3 of the last 4 when they host the Minnesota golden Gophers, another team with recent struggles, on Thursday. Tip is set for 8:30 on Fox Sports 1.