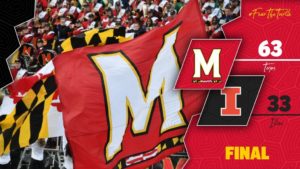 Red shirt sophomore running back Jevon Leake came into today’s game with just 4 total touchdowns in his career yet gave Illinois the business all day long.

By the time he got subbed out to end his day the young back from North Carolina piled up a ridiculous 274 total all purpose yards including a whooping 4 touchdowns to double his career totals coming in.

Leake break this game loose on special teams with a kickoff return touchdown after an Illini field goal to open the scoring in the first quarter.

On just the second Terps possession after the Terps looked awful on their opening drive, Leake break loose for a 97 yard return and ran it all the way back for the house call.

The Terps took a 7-3 lead on the play and never look back for the rest of the evening.

The crazy thing about Leake’s absurd day is that he did all that damage on just 8 touches. WOWZER 😱😱😱

After getting roughed up last weekend at Iowa, Terps coach Matt Canada promised coming in that his young quarterback hasn’t lost any confidence and today Kasim showed just why so many within the program have such high standards for young red shirt signal caller from nearby Washington DC.

Hill looked as calmed as he’s ever looked so far this season and was sharp with his throws all day besides one or two off throws he gave his receivers very catchable balls all day long.

This offense is the perfect fit for Kasim Hill and today the kid showed out a little bit of his HUGE potential.

His touch on the deep ball on that long completion to True Freshmen Demus is a THANG OF BEAUTY.

Kasim Hill is the key if this program is going to take that next leap to real contenders in the near future and today he was throwing bombs all over a clueless Illinois secondary.

Hill finishes his day completing 11/19 passes for 265 yards and 3 passing touchdowns, by far his best career totals yet.

While this game was too far out of hand to be an issue today, however the lack of focus coming out halftime by that

Maryland defense was disheartening to watch in an otherwise great showing by the offense and special teams.

At point late in the second half the Terps defense gave up over 250 yards from scrimmage on just 3 Illinois plays.

The Fighting Illini finished their day gaining 490 yards of offense however well over 300 of those came after halftime break.

This team cannot afford to take plays off and halves off going forward.

Lucky for the Terps the offense came to play today but the film session I’m guessing will be very rough for that defense after that porous second half showing.

Tre Watson once again got ejected for a very controversial hit That i believe was clean but the officials deemed illegal thus he’ll sit at the start of next week’s game vs a Michigan State that threw for over 300 yards earlier today with a freshman quarterback as their signal caller.

It was mostly the subs in the secondary for the most part when all those blown coverage’s occurred but its still very concerning nonetheless.

MATT CANADA MADE ADJUSTMENTS AT LAST

After Iowa sold out to stop his potent jet sweeps, Maryland failed to make the necessary adjustment all game and by the time the finish whistle got blown the Terps offense had put up a goose egg for the second time this season.

Coming in I saw based on that Iowa film how Maryland made it very easy for Iowa to crowd the line of scrimmage due to Matt Canada having the quarterback under center so much.

It was a game plan that played right into Iowa strengths up fronts and the Terps offense got suffocated as a result.

However, today Matt Canada had Kasim Hill in the short gun for majority of the snaps.

Which allowed the Terps abundance of perimeter weapons the time to create space and Kasim Hill the time to read coverage and deliver on some beautiful throws.

Canada’s small yet important adjustment may have just unlock this team’s potential on offense once again after being mostly smacked around during Big ten play.

This were the first major adjustment I’ve seen out of that entire Maryland offense all season and one that may have just saved their season.

By the time the clock hit zeros the Terps had piled up their big ten personal record for total yards in big ten play with over 800 all purpose yards from scrimmage.

Best Maryland offensive outing in over a decade going back to Ralph early years.

The Terps offense ended their day with over 14 plays of 20 or more yards, a unthinkable number in any era.

ONE MORE WIN TO BOWL

With the win today, the Terps close in on a bowl season with their record now improving to 5-3 overall and 3-2 in the rugged Big ten.

After all this team has went through and continues to go through for this guys to be just 1 win away with 4 to go from being bowl eligible is simply WONDERFUL.

Up next for the Terps is a feisty a Michigan State team that just ended Purdue hot streak earlier today.

The Terps have played the Spartans as good as anyone over the years thus this is game i expect Maryland to be up for.