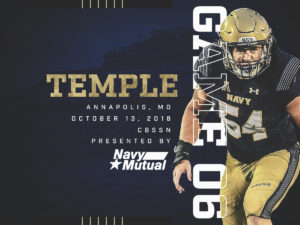 The Navy Midshipmen lost their third straight game as they fell to the Temple Owls, 24-17, Saturday afternoon in Annapolis.

Here’s a look at the game’s final numbers.

Coming off a stinging loss to Air Force last week, Navy’s head coach Ken Niumatalolo shook things up by starting senior Garret Lewis at quarterback. Malcolm Perry returned to slotback for the game. Lewis was a steady presence at QB for the Mids. He ended the day running for 56 yards, including a 1-yard TD run. In the air, Lewis was less effective, completing 3 of 11 passes for a total of 14 yards.

Sophomore fullback, Nelson Smith had his best game as a Midshipman. In 18 carries, Smith ran for a career-best 108 yards. He also recorded a career-long 45-yard run and a 12-yard run for his first career TD.

Temple’s Russo finished the day with 300 yards in the air, including a 62-yard TD pass to Ventell Bryant. With 8 receptions for 147 yards, Bryant clocked his 42nd straight game with a caught pass.

While the game ended in a loss for Navy, the Mids played better. The offensive line stepped up and Malcolm Perry seemed more settled returning to slotback. With a tough schedule ahead, it will be interesting to see if Navy can turn these improvements into wins.

Up next for Navy is Houston on Saturday in Annapolis.