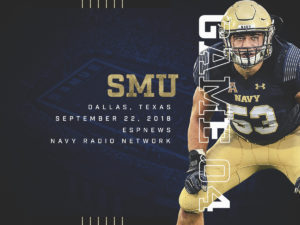 The Navy Midshipmen (2-1) return to conference play this weekend as they take on the 0-3 SMU Mustangs in Dallas.

Navy is looking for their third straight win. Despite dominating Lehigh last Saturday, the Mids played sloppy in a number of areas.

While SMU is winless on the season, the Mustangs have faced two top-25 schools (TCU and Michigan) in their first three games. With a quarterback controversy brewing on the Hilltop, SMU is ready for a statement win.

Here’s a look at how last week’s stats for each team match up.

A Look at the SMU Offense

The Mustangs are averaging just over 18 points per game. Their offense averages 272 yards per game, with only 81.6 of those yards on the ground. SMU has been outscored 133-44 through the first three games of the season.

These are not good numbers, no matter how many top-25 teams a school schedules to start their year.

A lot of the fault for these flat stats lies on the unexpectedly poor play of junior QB, Ben Hicks. After throwing for 3,569 yards and 33 TDs last season, Hicks has struggled this year. Completing only 47 percent of his passes for 476 yards and 3 TDs in SMU’s first three games, first year head coach Sonny Dykes benched the junior for the second half of last week’s loss against Michigan.

True freshman William Brown took over for Hicks at QB. The highly-touted Brown completed 11 of his 17 passes, throwing two TDs in 87 yards. As to who will start behind center against Navy, Dykes says that may come down to a game time decision depending how practice goes this week.

On the ground, Braeden West (senior, RB) leads the SMU offense with 129 yards and two TDs this season. West is one of only four players in the FBS to have scored both a 50-plus yard rushing and receiving TD in 2018.

A Look at the SMU Defense

The Mustangs have allowed at least 38 points in their last seven games. Worse yet, 91 percent of the time that an opponent makes it into the red zone against SMU, that opponent scores. Again, not good numbers.

Kevin Kane, SMU’s new defensive coordinator, has been tasked with fixing these problems. Kane is young, only 34-years old, but he is not inexperienced. He held the DC job at Northern Illinois the last two years. So, there is every reason to believe that SMU’s defense will only be getting better as the season progresses.

Navy’s head coach Ken Niumatalolo commented this week on the Mustangs efforts against a tough Michigan offense, “Physically, (SMU) held up pretty well against the run last Saturday. Michigan tried to pound them up the middle and they played physical inside.”

1. Past is not present… Navy must ignore SMU’s record. The Mustangs are better than their numbers this year.

2. Play sharp, not sloppy… Don’t make Coach Niumatalolo mad. The mistakes made against Lehigh last week must not be repeated.