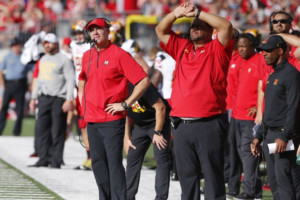 Saturday afternoon the Maryland Terrapins (3-3) hosted the Northwestern Wildcats (3-3) in a matchup of two Big Ten teams. Maryland was hoping to earn a huge conference win, but instead got battered with a final of 37-21.

The Terps jumped out to and early 7-0 lead off of Sophomore quarterback Max Bortenschalger’s twelve yard strike to Junior DJ Moore. Moore had a historic day hauling in twelve receptions for 210 yards and two touchdowns.

Moore became the seventh Maryland receiver to eclipse the 200 yard mark and produced the first twelve reception game by a Terps receiver since Torrey Smith caught fourteen balls in 2010.

On the Wildcats’ first possession following the Terps’ touchdown Northwestern grabbed their first lead of the game in the second quarter on running back Justin Jackson’s five yard run to put the Wildcats up 10-7. Maryland than answered on their ensuing drive on a fifty-two yard bomb from Bortenschlager to Moore for his second receiving touchdown of the game as the Terps reclaimed the lead 14-10. This was the last lead the Terps would have in the game as the Wildcats went on to outscore Maryland 27-7 throughout the remaining two and a half quarters. Following the Terp’s touchdown drive,  Northwestern drove straight down the field and scored on Junior quarterback Clayton Thorspon’s eighteen yard touchdown run as the Wildcats regained the lead 17-14. Right before halftime Northwestern scored their third, second quarter touchdown when Clayton Thorson found receiver Flynn Nagel for a fourteen yard touchdown pass with 24 seconds left in the first half to extend the Wildcats’ lead to 24-14.

The first three possessions of the second half all resulted in punts until Northwestern finally sustained a drive that led to a thirty-four yard field goal extending Northwestern’s lead to 27-14. On the following possession Bortenschalger found Senior receiver Taivon Jacobs for a twenty yard strike capping off a seventy-nine yard drive. Following the touchdown Northwestern made their second crucial mistake of the game as Clayton Thorson dropped back and had his pass picked off by Junior defensive back JC Jackson, his second interception of the season. However, the Terps squandered the opportunity as they went three and out following the interception. Northwestern then went on to extend the lead to 30-21 on a thirty-two yard field goal with 13:02 left

Maryland did nothing on the offensive side of the ball for the remainder of the game. The Wildcats added the finishing touches to their victory with a twenty-one yard touchdown run by Justin Jackson, his second of the game.

Bortenschlager finished the day 17/38, with a career high 255 passing yards, and three touchdown passes. Maryland’s explosive third year running back Ty Johnson, who has been of the best running backs in the country, was held in check for only twenty yards on ten carries.

Maryland (3-3) stays in conference as they head to Madison, Wisconsin to face Big Ten foe the number seven ranked Wisconsin Badgers (6-0). Kickoff is scheduled for 12:00 pm Eastern on FOX.