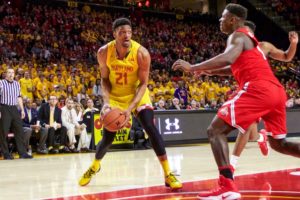 There is a lot of questions about the Terrapins that won’t be answered after the conclusion of tonight’s contest.  Once again, like the “Secret Scrimmage”, this doesn’t matter as it is only an exhibition and won’t go on Maryland’s season record.  With that being said, this is the first chance Terrapin fans have at seeing the new-look Terps.  Maryland fans will get to see freshman Darryl Morsell and grad transfer Sean Obi tonight.  Freshman center Bruno Fernando is out for the exhibition as another precaution so that he is healthy for the season opener against Stony Brook.  Nothing to worry about.

Without star G Melo Trimble, who has led the Terrapins to the NCAA Tournament in his 3 year career with the Terps, the new era of Maryland basketball will start tonight.  Mark Turgeon is back and the 3 sophomores are back as well.  Maryland also lost backup G Jaylen Brantley and senior C Damonte Dodd who played key minutes for the Terps last season.  With Brantley gone, Darryl Morsell will serve as the primary ball handler off the bench, but will most likely play more off-ball as Kevin Huerter and Anthony Cowan won’t both be out for a long stretch in any game.  Fernando will be battling with junior Ivan Bender, Obi, and senior Michal Cekovsky for minutes down low upon his return.

Justin Jackson is back in College Park after testing the waters of the NBA Draft last season.  Standing at 6’8, Jackson played the stretch four for Maryland last year, and already has that “NBA Body”.  Jackson is projected in the top 10 in the upcoming NBA Draft and will have to shine in order to make that happen.  With Obi, Bender, Fernando, and Cekovsky, Jackson can take some time off from battling down low and play more of a small forward for Maryland.  Not only will this help the Terps have a much bigger lineup compared to last season, but it will help Jackson improve his ball handling and quickness to reach that next step in his career. Anthony Cowan also looks to have a breakout season as he was the Terps PG last year with Trimble at the two.  Cowan has a year under his belt and experience from playing with Melo, and will have to lead this Terrapin offense.

It’s not the first game of the year, but the electricity is still there for Maryland fans.  The first game for the Terps will be against Stony Brook on Friday, November 10th at 7pm.  This is the first glimpse of the new era Terrapins, and a new start to the 2017-18 college basketball season.