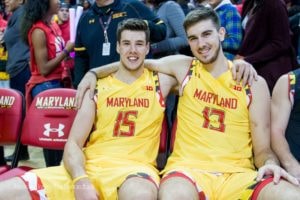 Maryland lost another big man for the remainder of the season.  To go along with Justin Jackson, Ivan Bender tore his meniscus in his right knee.  That makes two Terrapins, who play the same position, who get important minutes, who plays solid defense, who will miss the rest of the year.  It only gets harder from here.

With the Jackson injury, Maryland fans had to stay optimistic.  Jackson was supposed to be the leader of the team, even though that belongs to Anthony Cowan Jr. and Kevin Huerter, and has the best chance to go to the NBA.  Ivan Bender on the other hand, was just supposed to be a role player who picks up big minutes.  Bender has never been an athletic freak who puts up 20 and 10 a game, but as Turgeon has said in the past, he’s the smartest big man on the roster.  Sure, he makes bad decisions sometimes but who doesn’t?  Bender has outstanding court vision for a big and can drop it on a dime either back out to a guard, or a drop down to another post player.  He also knows the offense and how Turgeon wants things done.  Whether he always executes or not is a completely separate issue.

If Maryland had just lost Ivan Bender, and not both Bender and Jackson, this situation would be a little bit brighter.  Nothing at all to take away from Bender, but it is much easier to replace a guy like Bender, rather than a guy like Justin Jackson.  Also, Bender was one of the guys who was helping to fill that gap for JJ, and he was looking pretty good.

What does Maryland do now?

The Terps will need to see productive minutes from Jared Nickens and Sean Obi.  Nickens has been great from deep all season and must continue.  Obi doesn’t get a lot of court time, but we’ve seen that in the past with grad transfers (L.G. Gill).  We don’t really know how solid Obi is on the offensive side of the court.  We do know the man can rebound and rebound extremely well.  Obi could be that guy who comes in to legitimately get rebounds and go sit back down.

Another guy is Joshua Tomaic.  Tomaic looked real good… in one game.  Tomaic is very young, and hasn’t really gotten a chance to prove himself.  He has shown the ability to play at this level, but not just yet.  I wouldn’t be surprised if Tomaic got 30 minutes a game, or if he comes in with 20 seconds left in a blowout.  Tomaic will play depending on matchups.

So it looks like Nickens should be the starting 4 for a while.  Obi and Tomaic will see some time in replacement of Jackson and Bender.  But there is still one option that I could see Turgeon using: Bruno and Ceko.

Think about it? Bruno and Ceko down low, at the same time together? Fernando is athletic and has a good enough stroke to run the 4, and Cekovsky can do work in the post.  It would also make the guards job a whole lot easier.  The only issue I see, and it is probably why this will just not happen, is foul trouble.  If Cekovsky and Fernando are both out there for the whole time, fouls will pile up.  Then when they pick up their 3rd at the under 16 in the first half, who do you have to replace them?

It’s a really tough situation for Maryland.  The Terps are going to need production from whoever Turgeon throws in there to replace Bender and Jackson.  The only thing Terp fans can bank on, is Huerter, Fernando, Morsell, and Cowan Jr. are still healthy.  Yes, this is a big punch in the face for the Terrapins.  But no, the season is not over.