Can a new hitting coach revive the offense?

When you look back at last season, the Baltimore Orioles were bad from game 2 to 162. Adam Jones blasted a walk-off home run on Opening Day, and that was the only time the team was above the .500 mark.

Everything that could go wrong, did. The offense was down right atrocious. Runs came at an absolute premium and they earned every bit of their 115-loss season.

You have to go back to 2002 to see the last time the Orioles played so poorly on offense. Mike Hargrove’s team still racked up 20 more wins than Buck Showalter’s in 2018. The 2002 Orioles finished the season with a team batting average of .246 – the worst in the American League. They scored 667 runs, finishing 13th out of 14 teams.

That team didn’t have any stars though. Gary Matthews Jr. led the team in batting average at .276 and Tony Batista hit 31 home runs.

Last season, the Orioles had Manny Machado for the first 96 games. While he hit .315 with a .387 on-base percentage, it still wasn’t enough to keep the team from the basement. What’s interesting is that the offense actually hit better after the All-Star Break; after trading away two pieces of an offense that was setting home run records a few years back, they finished .30 points higher in average after the mid-summer classic.

Time for a coaching change

Yesterday, the club finalized and announced its coaching staff and included in that list is Coolbaugh’s replacement, Don Long.

Long has spent the past five seasons as the hitting coach for the Cincinnati Reds. Prior to his major league coaching experience though, he was a minor league manager for 11 years. 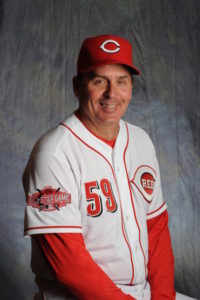 He compiled a 698-697 overall record managing at different levels of the minors. His most successful tenure as manager came with Triple-A Vancouver, affiliate of the then California Angels. From 1994-1996, Long finished with a 226-195 record and was Manager of the Year in 1995.

His first stint in the big league as a hitting coach was with the Pittsburgh Pirates in 2008. He spent three seasons with the Pirates, but their offense never ranked higher than 9th in the National League in team batting.

As mentioned, Long was the hitting coach with the Reds prior to coming to over to the Orioles. Last season, although finishing last in the NL Central, the Reds hit .254 overall. Scooter Gennett led the team with an average of .310 and Joey Votto led with a .417 on-base percentage. They finished in the top-five in the NL in batting average, hits and on-base percentage.

Long will now get the opportunity to work in the American League. He’ll now get to teach guys like Cedric Mullins, DJ Stewart, Trey Mancini and Chris Davis the same things he worked with Joey Votto on.

Votto has hit .280 or better in each of the last four seasons. He was an All-Star in 2017 and 2018. For you country music fans out there, it reminds me of one of Billy Currington’s first hits, “Must Be Doing Something Right.”

Brian Pinter is the Director of Coverage on the Baltimore Orioles for Maryland Sports Blog. His views and opinions are that of his own and he welcomes any and all discussions. Follow along with Brian Pinter this season on Twitter, @b_pinter23.