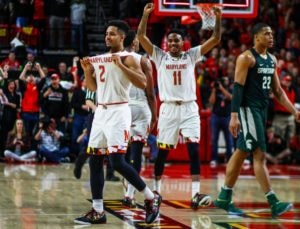 Melo Trimble was the face of Maryland basketball in his three year career.  Trimble’s freshman campaign was Maryland’s first season in the Big Ten back in 2014-15.  He led the Terrapins to three straight NCAA Tournaments, including a Sweet 16 appearance in the 2015-16 season.  Everyone in College Park thought the world of the hometown king, and was distraught when Trimble decided to enter the NBA Draft following his junior year.  Now, there is a new star point guard in town.  Anthony Cowan Jr.

In the win last night over Minnesota, there was a segment about Cowan Jr. and Trimble that caught my attention.  They compared Cowan’s sophomore year to Melo’s career.  In Trimble’s three seasons, he averaged 15.9 ppg, 3.9 apg, 3.7 rpg, and shot .344 from the three point line.  This season, Cowan Jr. is posting 16.4 ppg, 4.6 apg, 4.7 rpg, and is shooting .394 from deep.  It really made me think, would Maryland rather have Melo Trimble, or Anthony Cowan?

For three years, there was no question that Melo was the best point guard the program has had since Greivis Vasquez.  But seeing what Cowan Jr. is doing this year, I think that the comparison of Trimble and Cowan is not so crazy.

Trimble’s best season was his freshman campaign, averaging 33.5 minutes and 3.0 assists per contest.  Cowan this season is averaging an absolutely insane 35.9 minutes, along with 4.6 assists per game, as mentioned before.  In Melo’s sophomore season, he put up 10.8 shots per game on 41% from the field.  Cowan Jr. is putting up 10.4 shots per game, and 41% from the field.  Almost identical.  Trimble shot 41%, 31%, and 31% from deep his his three years. Cowan has shot 32% and so far, 40% this season.  So the argument that Cowan would never be as consistent as Trimble from the field is incorrect.  Cowan’s average rebounding numbers, standing at 6’0 flat by the way, is already higher than Trimble’s, who is 6’3, just for the record.  (Cowan 4.2 rpg, Trimble 3.7 rpg).

We could go through all stats here, but there are also other components that you don’t need to have on paper.  Cowan Jr. is much faster, much quicker, and a much better on-ball defender than Trimble ever was.

With all that being said, Melo is one of our guys.  What he did for this program was incredible, and the memories will never be forgotten.  Trimble’s game winner against Michigan State for example.  His last basket at the XFINITY Center, looking out at the crowd and flashing the Maryland across his chest, pointing and yelling, ‘this is MY town’, will always be one of the best moments in Maryland history.  But Melo is gone and another player taken his place.  An upgrade? Maybe.  The new king of College Park? Absolutely.