A+ for Coach Todd Reirden

After Barry Trotz resigned as head coach, the Washington Capitals immediately promoted the top assistant Todd Reirden. This was great news for the team as he had been coaching the defensemen for the last four seasons. Brian MacLellan, General Manager for the Washington Capitals, had said that by promoting Reirden it will help the team in “transition seemlessly into the next season and beyond.”

Yesterday, less than a week from the opening game in a locker room interview after their practice, Alex Ovechkin was asked “Now, two weeks in, have you notice any difference with Todd Reirden behind the bench?” to which he replied “No, he is fine I think he understands what he has to do and he is very calm and you as a player can feel that.” 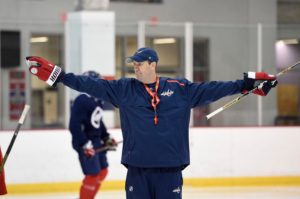 T.J. Oshie,  was asked by one of the reporters about his opinion of coach Todd Reirden performance as head coach so far, he said: “Coach Todd Reirden is doing great. I can not predict how he’s going to do in the season, but he has been doing a great job. Our practices have been pretty Up Tempo and they have gone very smoothly. At times when you do the same drills over and over, it can get repetitive. This training camp has kept us on our toes a little bit. He’s doing a great job.”  When asked about Todd’s performance as coach in the preseason games he said, ” The callings of the lines is the hardest thing for a coach to get used to and in the games that I have played there haven’t been any mix up“. Later, Oshie was asked about the coach’s performance motivational wise to which he responded “He is very positive, very direct, very happy, very excited to get done each day…It’s fun, It’s fun coming to the rink”

Congrats Coach Reirden on your A+!! Keep the good work and bring us our Stanley Cup “Back to Back”. 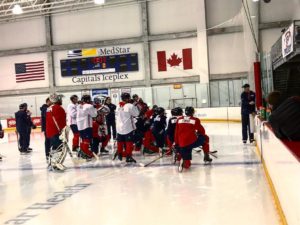