WWE Announcing Icon On The Move

Even a non wrestling fan has probably heard of “Good Ole JR” the 67 year old mainstay with WWE has decided not to resign with the company. Ross mage the announcement on his podcast ‘The Jim Ross Report” earlier today. Ross made millions laugh with his over the top iconic responses to action in the ring. Chemistry between Ross and Stone Cold Steve Austin was as good as it gets in the biz be them friend or foe. Vividly proclaiming things like “Dear God, that man has a family”, “We got ourselves a slobbernocker”or “Business just picked up”. Epic chants for Austin of “Stone Cold Stone Cold” and the phenomenal remark in the Undertaker’s match “As God is my witness that man is broken in half”. There will never be another Jim Ross and there will damn sure never be another “Good Ole JR”

Interested in my opinion? Now keep in mind it is only my opinion. Jim Ross signs with AEW alongside Cody Rhodes and helps the young upstart company shoot for the stars. 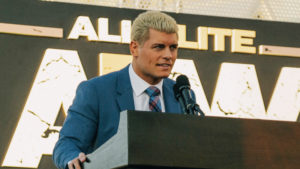 Check out a previous article on WWE