A Rowdy Turn Of Events

Monday night RAW has been on fire the past couple weeks. Kofi Kingston is robbed of his title shot at WWE Fastlane by Vince McMahon. Kevin Owens is gifted that same spot against Daniel Bryan by Vince himself. Roman Reigns makes a miraculous recovery and returns to take back his yard. Reuniting The Shield becomes a priority for the big dog. Charlotte Flair is handed the opportunity to fight for the RAW Women’s title at Wrestlemania. Becky Lynch aka “The Man” is suspended, then later arrested after reeking havoc across the country. Pro wrestling has been turned upside down, there is chaos and reckless abandon giving RAW a much needed new feel. Enter “Rowdy” Ronda Rousey to turn hard heel. 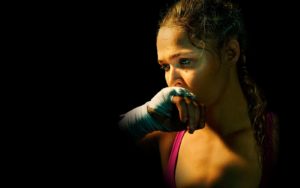 Rousey is the former UFC Women’s champion and proclaimed baddest woman on the planet. Staring on the big screen with roles in Furious 7, Expendables 3 and Mile 22. Gracing the cover of the swimsuit issue and setting the internet on fire. Ronda paid homage to her idol and friend Roddy Piper taking his look and nickname “Rowdy” to begin her highly anticipated WWE debut. The WWE universe loved her, hell the world loved her. Ronda made a victorious debut tagging with Kurt Angle against Stephanie McMahon and Triple H at Wrestlemania. Yes, i said Rousey debuted at Mania no small feat in and of itself. Defeating Alexa Bliss at Summerslam to win the RAW Women’s title Rousey was setting the world on fire and the fans loved her. However this is pro wrestling folks and things change fast even for the “Rowdy” one. 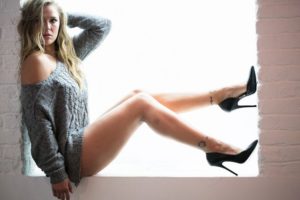 Becky Lynch making the change in her character to “The Man” and implementing a much more aggressive and physical style took the WWE universe by storm. Rapidly racing up the ladder and working her way into the title picture as well as the fans hearts Becky’s popularity has never been higher. Rousey began to hear the boos and feel the jeers from the ever evolving fan case. Rousey even admitted to being booed out of her home state during a WWE event, a moment in time that opened her eyes to a new attitude. Giving her all trying to learn the craft and perfect her game Ronda has lost blood sweat and tears in her short journey. She battled injuries and brutal attacks yet always stood tall the following night and always ready to fight. Rousey had given everything to entertain the fans and was in utter disbelief when they turned their back on the champ.

Last night was the breaking point for Rousey. Stephanie began to grant a match with Lynch and Flair for Ronda’s vacated title at Fastlane when the rowdy one arrived on the scene. Walking with a purpose and with a concrete face of determination the champ hit the ring. Confronting Stephanie and denying that she ever vacated the title Ronda went off on her boss in front of thousands of people with millions watching live at home. Ronda then turned her attention to Flair and Lynch and the onslaught began. Levels of brutality that mirrored a video game took place in the ring as the baddest woman on the planet held nothing back. Rousey showed the world a new side. a very dark side and more importantly a very dangerous side. Lynch is scheduled to face Flair at Fastlane this Sunday. Charlotte winning keeps the confirmed match with the queen vs Rousey at Wrestlemania. Lynch winning changes that match to triple threat at Mania with all three Women fighting for the RAW Women’s title. Things took a “Rowdy” turn of events, a heel turn that has unleashed a beast the likes of which have never been seen in the WWE Women’s division. 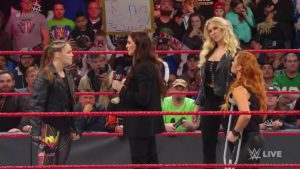 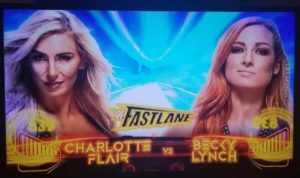 Check out my previous blog on Becky Lynch