Former University of Maryland Football star players having themselves one heck of a Sunday. 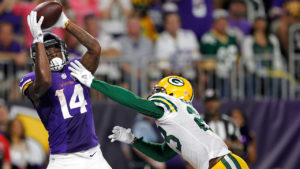 The third year Vikings wide receiver is making a huge impact this Sunday for his team.

Diggs caught a huge touchdown early in the 4th quarter of their game between the Green Bay Packers and the Diggs visiting Vikings.

With his team facing second and goal from the Green Bay’s three-yard line and a deficit of 20-7, the Vikings choose to line Diggs up on the left side of the formation in a bunch set.

After the snap Diggs ran a quick out route in the end zone and Vikings quarterback Kurt Cousins found him with a short toss.

Diggs was not done. Later on, with his Vikings now trailing 23-14 after a Packer’s field goal. Diggs ran a slant and go with just over 7 minutes left in the game. It was 2nd and a long 10.

Vikings quarterback Kurt Cousin was facing a lot of pressure in the pocket however he was just barely able to release the deep pass and Diggs somehow came down with it in between two Green Bay defenders.

Diggs shed one tackle and out ran the other to the end zone for a long 75-yard touchdown catch. Clutch

Diggs finished his day with 9 catches for 128 yards receiving 2 touchdowns. One of his better performances in his young career so far.

The Minnesota Vikings signed Stefon Diggs to a long-term contract over the summer and games like today show just why they believe in the 3rd year Maryland product so much.

Entering his 11th season in the NFL and his 1st with the Carolina Panthers Torrey Smith has had plenty to be thankful for throughout his NFL career.

Smith one of the NFL’s good humanitarians in the community won his second Superbowl with the Philadelphia Eagles just last season.

Now more of a veteran presence for molding younger wide receivers, Smith has proven so far this season he still has a lot in the tank.

On Sunday, with his Panthers trailing and trying to make a comeback Panthers star quarterback Cam Newton found Smith in the back of the end zone on a quick slant that had a lot of heat on the pass.

Smith had a few drops earlier however when his team needed a play Cam chose to go to the veteran Smith, which says a lot about what Cam Newton thinks about his veteran wide out.

The 3-yard touchdown made the score 24-17 with the Panthers still trailing the home Atlanta Falcons.

Smith finishes his day with 3 catches for 33 yards and the 1 touchdown. The game ended in defeat for the Carolina Panthers 24-31. 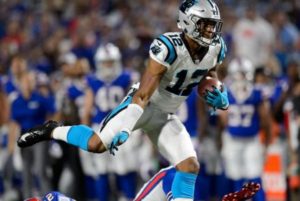 D.J Moore was Maryland’s do it all player last season. He caught passes, ran the ball, and even threw the ball some. Whatever then Terps offensive coordinator Walt Bell needed to do to get the ball in Moore’s hands.

Moore used all those targets to set a Maryland record for catches in a season and truly had one of the more productive seasons a Terrapin receiver has had going back to maybe Torrey Smith’s days as a Terp.

Moore went into the draft process with many doubting him but woke everyone up during the NFL combine and had one of the more memorable draft rises in recent memory when he went in the 1st round as the very first wide receiver taken in the 2018 NFL draft by the Carolina Panthers.

However, heading into his second game as a professional Moore was still looking for his very first NFL catch or target for that matter.

The Panthers basically had DJ Moore as their 4th stringer on their depth chart. He didn’t get any balls thrown his way in his first NFL game but came into week 2 looking to get into the fold for a Panthers offense that needed more play makers and explosive plays.

Early on, things weren’t looking good for Moore as the Panthers once again had him playing gunner on special teams instead of snaps on offense.

The result is Moore catching the ball near the Falcon’s 35-yard line and immediate turning on a dime stiff arms a would-be tackler and zips right down the middle of the Falcons entire defense for a huge 51-yard touchdown catch.

It was Moore’s very first profession target and catch and the Panthers rookie took it the distance.

In just one play Moore showed why he was the first wide receiver taken in the draft and the Carolina Panthers would be wise going forward finding ways to get the Maryland product the ball more often.

He’s simply a game changer. The game ended in defeat for Moore and his Carolina Panthers teammates.

However, the rookie showed he belongs and deserves far more targets than just one.

Moore was targeted on the very last play of the game as time expires and he nearly came up with the impossible touchdown catch in between 3 Falcon’s defenders but Moore wasn’t able to hold on.

Numerous Carolina Panthers fans took to twitter to blame the loss on the lack of targets or even playing time for their first-round pick DJ Moore. Expect Moore to see the field a lot going forward.

DJ Moore finishes the game with just the lone catch and touchdown. The game ended in defeat for Moore and his Carolina Panthers.

*Moore and Smith are both teammates with Carolina along with former Terps middle linebacker rookie Jermaine Carter Jr.

Maryland is THE REAL Wide Receiver University at least on this Sunday they were. #GOTERPS