The Denver Nuggets fell to the Washington Wizards 109-104 Monday night at the Pepsi Center, dropping their record to 1-2. It was a contest with a controversial technical called on Nikola Jokic and a boatload of turnovers for Denver. 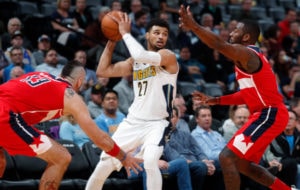 To the backcourt. This was an interesting guard matchup, with Washington’s dynamic tandem of John Wall and Bradley Beal going against the Nuggets’ young combination of Jamal Murray and Gary Harris. And it yielded some strange stat lines. Wall went 3 of 13 from the floor but 13 of 15 from the free-throw line, and added 12 assists against two turnovers. And he was clutch, hitting the jumper after Jokic’s 3-pointer to cut Washington’s lead to two late in the game and clinching the win with two free throws in the waning seconds. Beal led the Wizards with 20 points on 8 of 17 shooting and added five rebounds and two assists. Harris went 1 of 6 for two points with five rebounds, six assists and four turnovers. And Murray only had one of the Nuggets’ 24 total turnovers but shot 4 of 12 to drop his season mark to 7 of 27.

Despite Washington’s 13 steals and overall team quickness, the Nuggets actually outscored the Wizards 21-18 on fastbreak points. 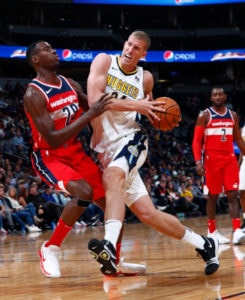 John Wall on Jokic’s bump of Wizards coach Scott Brooks: “No matter what’s going on between players and teammates, that’s something you don’t do to a coach. That’s like me calling a coach a certain name.”