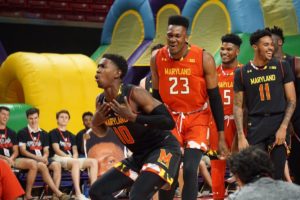 Maryland was back in action again today, just after Thursday’s win over Ohio.  The Terps took down Gardner-Webb by 22, without Bruno Fernando or Justin Jackson.  This was a great game for Maryland for various reasons.

Darryl Morsell dropped a new career-high of 18, going 6-8 from the field, and Kevin Huerter added 15, 6-9 from the field.  Michal Cekovsky and Anthony Cowan Jr. also reached double digit scoring.  Ceko finished with 12 and Cowan Jr. with 10.

Maryland averages 17 turnovers a game which is ridiculous.  That stat screams out how young this Terrapin team is.  However, the Terps finished with 11 today, showing improvement. Maryland also shot 54% from the field and 50% from deep, 10-20 from three.

Even though it was Gardner-Webb, no disrespect to the team, Maryland still did a lot of impressive things.

The Terrapins won their third straight game, and the walk-ons got minutes again.  Maryland improves to 9-3, still 1-1 in the Big Ten.  The Terps will host Catholic University on Tuesday at 7pm.

It’s the easiest stretch of Maryland’s schedule over the next few weeks.  The Terps will take on Fairleigh Dickinson and UMBC after Catholic, and they get time to recover in between games.  Those are the final three games of the non-conference schedule, then Penn State comes to town to restart Big Ten play on January 2nd.