Optioned LHP Donnie Hart to Triple-A Norfolk, #Birdland.”
Hart has been on the shuttle between the Orioles and Norfolk all season. The Orioles finish up a home series against the Seattle Mariners today. The Orioles lost in extra innings last night 8-7.The pitching matchup is RHP Jimmy Yacabonis(0-0, 15.43 ERA) facing off against RHP Mike Leake(8-4, 4.11 ERA). Here’s the lineup for today’s game. 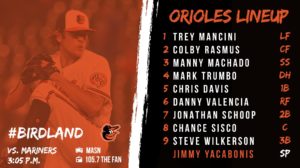