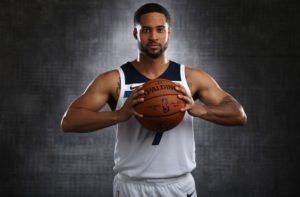 Melo Trimble was Maryland’s leader and face of the program in his 3 year career with the Terps.  Trimble helped get the basketball team to 3 straight NCAA Tournament appearances, including a Sweet 16 birth in 2015-16.  Now, with Trimble gone, he moves on in his career now playing with the Iowa Wolves in the NBA G-League.

Melo made his debut against the Lakeland Magic in a win, 96-92.  Trimble led the way for the Wolves with 26 points on 7-22 shooting and also racked up 7 assists.  He went 2-7 from outside the arc and 6-7 from the free throw line as well.

Trimble got his first bucket as Maryland fans would expect him to.  In his Maryland career in college, Melo was the best in the nation at using the pick and roll.  He rarely made a mistake or turnover on the play, and it usually resulted in a 3 in the corner, no-look dish to a big man, or a tough bucket at the rim.  Melo got his first bucket after using the screen, driving hard with the right, and finishing with his right while battling through contact for the and-one.  It’s so beautiful that Maryland fans can see it in their heads without having to look it up.

Another thing that Terrapin fans were used to, the Wolves were trailing by double digits in the third quarter.  Melo took the game over late, and led his team to a victory.  I guess even in the pros you just have to Stay Melo.