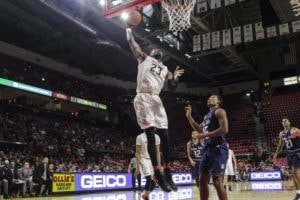 Maryland is 5-0 on the season after taking down Jackson State, 76-45 earlier in the week. The Terps have beaten some solid ball clubs in Butler and Bucknell, but this contest will be Maryland’s toughest so far.

St. Bonaventure is 2-1 with a loss to Niagara in the first game of the year.  The Bonnies took down Jackson State, as well as the Terrapins, and Maryland Eastern.  Many have predicted St. Bonaventure to either win the Atlantic 10 Conference, or at least finish in the top three.  Many others also predicted the Bonnies reaching the NCAA Tournament this season as well.

St. Bonaventure is led by Matt Mobley.  Mobley is averaging 25 ppg, 5.3 ast, 5.3 reb and 36 minutes per game this season.  Jaylen Adams and Mobley averaged almost 40 points per game combined last year, but Adams has not played a game yet this season due to a sprained ankle.  He is listed as questionable, which brings us to the more important injury update.

As Mark Turgeon said in a short interview on Wednesday, Darryl Morsell is ‘day-to-day’.  Morsell injured his hamstring in the win against Jackson State on Monday, and has been limited in practice.  Without Morsell, Maryland loses one of the best on ball defenders on the team and a high energy playmaker.  Not only does it shorten the bench for the Terps, but Morsell has done a lot to contribute to the 5-0 start.  He was the key man in the Bucknell game, and shows flashes of dominance with his athleticism and defensive abilities.  If Morsell is out however, I’m sure everyone would rather see him miss tonight’s contest and be ready for the rest of the long season, rather than rush him back too fast where he injures the hamstring even worse.

Even if Morsell is out, the other freshman is coming off back-to-back impressive games.  Bruno Fernando against Jackson State was Maryland’s go-to scorer, along with Kevin Huerter, in the win.  Fernando scored a career high 18 points, along with 9 boards and 3 blocks.  Justin Jackson’s offense also looks to be coming around.  Jackson hit a couple three’s, grabbed a couple boards, and is breaking out of his slump.  That only makes this Terrapin team even more deadly, as the Terps haven’t really had the real Justin Jackson to start out this season.

This is the first meeting ever between this two teams.  The game will take place in Florida, in the Emerald Coast Classic.  Tip-off is a late one tonight, set for 9:30pm.