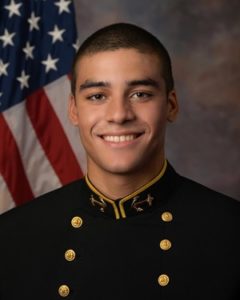 Isaac Salinas, freshman attacker of the Navy water polo team, was named the CWPA Rookie of the Week on Tuesday.

The Collegiate Water Polo Association awarded Salinas for his outstanding performance during the Labor Day weekend’s Navy Open. The 6’1″, 175-pounder from Spring City, Pennsylvania scored a total of nine points on six goals and three assists in the season opening tournament.

In his first collegiate appearance, Salinas scored two goals, including the game-winner, in Navy’s victory against the Iona Gaels on Saturday morning. Then, in a late afternoon exhibition against Lindenwood, the freshman scored another goal in the 12-12 tie.

Next up for the Navy water polo team is the two-day Princeton Invitational this weekend. The Midshipmen will face Air Force, Harvard and Stanford in New Jersey.